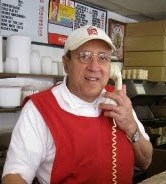 COLUMBIA - Adnan Addada “Andy” Shlon, 79, passed away suddenly at his home on Thursday, January 14, 2021. A celebration of life will be held 3:00 p.m. Tuesday, January 19, 2021 at Dunbar Funeral Home, Devine Street Chapel. There will also be a livestream of the service on Dunbar Funeral Home – Devine’s Facebook page: https://www.facebook.com/DunbarDevine The family will receive friends from 1:00 p.m. until 3:00 p.m. prior to the service at the funeral home. Andy was born November 11, 1941, the seventh of thirteen children to Ahmad and Kawsar Shlon of Lebanese decent. As a young man he was employed by Kuwait Airlines, which allowed him to tour the world. In 1965, he began his studies in Columbia and started a lifelong love affair with the University of South Carolina Gamecocks and Five Points. He studied bookkeeping but found his true calling was being a deli man and in 1978, he opened “Andy’s Deli” on Greene Street. Andy was an inspiration to many people, to some he was a father figure and role model. He loved everyone and always looked for the best in people. Andy will be remembered as a giver; he enjoyed helping anyone that he could, whether it be by a warm meal or a warmer smile. He greeted everyone by saying “Hello, my dear or hello, my friend” and he meant that. One of his greatest achievements in life was befriending generations of families that he met through the deli. Those left to cherish his memory include his wife of 50 years, Carole Dew Shlon; two sons, Andrew “Andy” Shlon (Betsy) and Adam Shlon (Diana); three grandchildren, Andrew, Braiden, and Emily; siblings, Kamal Shlon, Majdi Baddourah, and Moe Baddourah; brother-in-law, Michael E. Dew (Pat); sister-in-law, Sandy Hyatt; and many other family members around the world. In lieu of flowers, please consider making a donation to your local food bank in Andy’s honor. Memories may be shared at www.dunbarfunerals.com
See more See Less