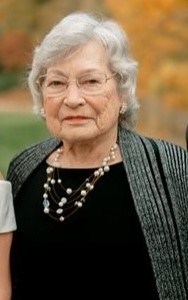 PROSPERITY - PROSPERITY - Jacalwyn (Jackie) Barlow Birchfield, wife of Jerry Kenneth Birchfield and daughter of the late Jackson Martin Barlow and Alwyn Redmond Barlow, passed away to her eternal home on September 23, 2022. Jackie was born in Atlanta but spent her childhood in Birmingham, Alabama before moving to Anniston, Alabama where she graduated high school. She received a B.A. degree in Math from Emory University in Atlanta, GA. She worked at various roles in her life including at the CDC, as an office assistant to Dr James Bishop and with the state auditor’s office as a CPA. In December 1962, she married Jerry Kenneth Birchfield and eventually settled in Columbia. While in Columbia, Jackie spent many happy years raising her four children while being involved at Forest Lake Presbyterian Church. In retirement, Jackie enjoyed her family and grandchildren while living her dream on Lake Murray with her husband and being involved at Wightman United Methodist Church in Prosperity. Jackie enjoyed each stage of her life. She always strived to love people and follow God’s directions. She will be missed by all those who knew her. Jackie is survived by her husband of 59 years, Jerry, as well as their four children Bromley (Pam) of Simpsonville, Catherine Stoddard (Gary Pollock) of Seneca, Kenneth (Denise) of Powdersville and Stanley (MeMe) of Seattle, WA. She is also survived by her sister Paula Hoover of Hanceville, AL, her seventeen grandchildren and four great-grandchildren. Jackie was preceded in death by her parents, her sister, Sallie Halbrooks, and son-in-law, Wesley Scott Stoddard. The family will receive friends at Dunbar funeral home on Devine St. in Columbia from 3-5pm on Sunday, Sept 25. The funeral service will be at 1pm on Monday, Sept 26 at Wightman United Methodist Church in Prosperity. Memorials may be sent to The Jerry Birchfield Family Fund for Children at Thornwell Home for Children in Clinton or the Salvation Army in Columbia.
See more See Less

In Memory Of Jacalwyn Barlow Birchfield