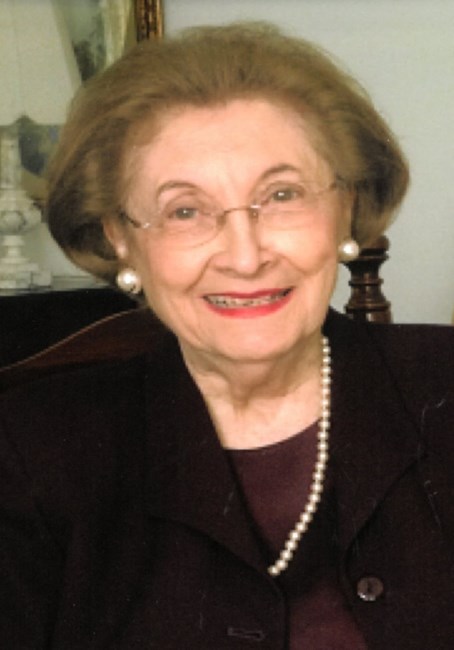 LEXINGTON - Janette Joseph Gleaton of Lexington, SC, died peacefully at her home on May 3, with her daughters by her side. Janette was born in 1924 in Georgetown, SC, to Lebanese immigrants, Shickory Joseph and Sarah Francis Joseph. A member of the Greatest Generation, her childhood was shaped by the Great Depression. With her widowed mother and siblings, she moved to Charleston during World War Il, working on the war effort. There she met and fell in love with a young sailor, Mike Richard Gleaton. After the war and his return from the South Pacific, they married and eventually had two daughters. Janette loved her mother and siblings and the South Carolina Lebanese community, and thought her life would be lived among them. Instead, her husband's career led her to make loving homes for her husband and daughters in six different states, until his retirement brought them happily back to South Carolina. For Janette, her family and her Catholic faith were at the center of her life. She sacrificed her professional aspirations to focus on raising her children, to their great benefit. Despite the distances, she made sure her daughters remained closely connected to their extended family of grandmothers, aunts and uncles, and cousins. Janette and Mike were married for 49 years, until his death in 1995. Janette also mourned the loss of her sisters, Annie Joseph, Freda Joseph, Josephine Joseph and Rose Keach, and her brother Arthur Joseph. In the last year of her life, after her last sibling died, Janette decided that she had lived long enough. She concluded that her daughters could finally be trusted to live without her continued advice, and she wanted to go home to be with her family. When that time came on the morning of May 3, her final words were: "I'm not worried." She is survived by her daughters Sara Gleaton Kirkland, Janet Lynn Leslie and her husband Edward Leslie, sister-in-law Dorothy Lydon Joseph, stepgranddaughter Kimberly Kirkland and her husband Randolph Reis, stepgreatgrandsons Evan and Liam Kirkland Grennon; stepgranddaughters Jennifer Leslie Lord and her husband Edward Lord Jr; Darcy Fowler and her husband Darby Fowler; and great grandchildren Joey Davis, Edward Lord Ill, Savana-Lynn Fowler, Aria Fowler, Kipp Fowler, and Asher Fowler, and many devoted nieces, nephews, grandnieces, and grandnephews, and great grandnieces and nephews. She opened her heart to all of them and loved nothing more than being with them. Gifts in her memory may be made to St. Joseph Catholic Church, 3512 Devine Street, Columbia, SC 29205. Janette's life will be celebrated first by the Rosary at 6:30 p.m. with visitation immediately following from 7:00 until 8:00 p.m. on Thursday, May 5, 2022 at Dunbar Funeral Home Devine Street Chapel. A Mass of Christian Burial at St. Joseph's will take place at 11:00 a.m. on Friday, May 6, 2022. Memories may be shared at www.dunbarfunerals.com.
See more See Less

In Memory Of Janette Joseph Gleaton