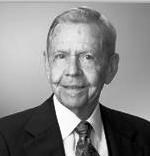 COLUMBIA Julian Jacobs Nexsen died Wednesday, May 6, 2015, at his home after living gracefully with dementia for several years. A worship service celebrating his life will be held at 11 o’clock on Friday, May 8, 2015, at Eastminster Presbyterian Church. The family will receive friends in the church parlor following the service. Dunbar Funeral Home, Devine Street Chapel, is assisting the family. Born April 14, 1924, at home in Kingstree, South Carolina, he was the youngest child of the late William Ivey Nexsen and Barbara Gewinner Jacobs Nexsen. He attended The Citadel for one year after which he was called up to serve in the U.S. Armed Services. As a Lieutenant in the U.S. Army, he served in France and Germany during WWII from 1942-1946 where he earned the Combat Infantry Badge and the Bronze Star. Returning home he graduated from the University of South Carolina magna cum laude where he was a member of Phi Beta Kappa. Mr. Nexsen was first honor graduate of his class at the University of South Carolina School of Law. Shortly after graduation he was again called into service as a Captain JAGC in Korea. Returning to Columbia, Mr. Nexsen joined the law firm of Cooper and Gary where he was one of the first four attorneys. There he focused on a career that would span six decades. He became managing partner of Cooper and Gary, which in the 1960’s was renamed Cooper, Gary, Nexsen and Pruet and later Nexsen Pruet. A widely respected and admired attorney, Mr. Nexsen was known as much for his integrity as he was for his legal skills. He earned the USC Law School’s Prestigious Compleat Platinum Award, which recognizes outstanding professional and civic achievement and the Durant Distinguished Public Service Award from the South Carolina Bar Foundation. Mr. Nexsen was a former Chairman of the Board of Trustees of Providence Hospital, a former trustee of the Providence Foundation, and a former trustee of the Sisters of Charity of St. Augustine Ministries Development Corporation. He was a member of Eastminster Presbyterian Church for almost sixty years where he served as Deacon, Elder, and Clerk of Session. Surviving are his children, Ivey Nexsen Bouknight and her husband, Heyward Harles Bouknight Jr. and Julian Jacobs Nexsen Jr. and his wife, Christine Johnston “Christy” Nexsen; six grandchildren, Elizabeth Bouknight Barber (Scott), Heyward Harles Bouknight III (Whitney), Elizabeth Kincaid Nexsen, Blair Bouknight Brading (Brett), Julian Jacobs Nexsen III and Sarah Ivey “Sally” Nexsen; six great-grandchildren, Ivey Barber, Mary Elizabeth Barber, Julian Barber, Virginia Bouknight, Ellie Bouknight and Mary Margaret Bouknight. He was predeceased by his wife, Mary Elizabeth “Betty” McIntosh Nexsen; sister, Mary Nexsen Brown; brothers, William I. Nexsen Jr., John A. Nexsen, Louis J. Nexsen and Samuel Melton Nexsen. The family greatly appreciates the devotion and love of Mr. Nexsen’s long time housekeeper and friend, Annie Mae Gatson. The family also wishes to express heartfelt gratification to his caregivers, Vivian Harris, Vera Woods, Thelma Hammonds, Brenda Hennie, Avon Gary and Thelma Cornish. Memorials may be made to Eastminster Presbyterian Church, 3200 Trenholm Road, Columbia, SC 29204 or to a charity of one’s choice.
See more See Less

In Memory Of Julian Jacobs Nexsen