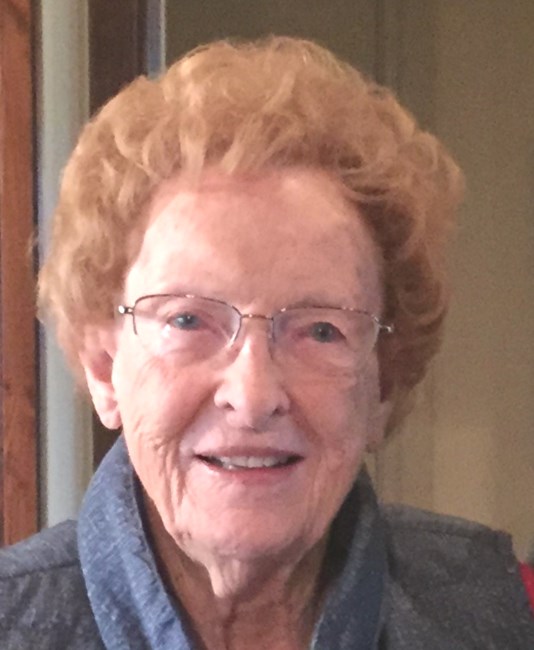 Helen Leona (Davis) Grunke passed away July 30, 2022 in Spring, Texas. She was born on February 27, 1926, to Claude M and Leta O. Davis. She and her older brother, Lyle, grew up on her family’s farm in rural Gray County, Kansas where they attended the 1-room school a mile away, sometimes riding there in a pony-drawn cart. She lived through the Great Depression and the Dust Bowl, saw the introduction of electricity and telephones to rural Kansas, and she survived rheumatic fever and whooping cough in childhood. Helen was in 4-H and loved music. She would listen to the battery-operated radio for hours to hear her favorite songs, then would teach herself to play them on the piano. She graduated Cimarron High School in 1943 and went on to Dodge City CC, working at Palace Drugs part time. At a community dance she, a college freshman, met Don Grunke, a high school senior and the love of her life. In 1945, with Don away in the Navy and WWII raging, Helen attended Nursing School at Wesley Hospital in Wichita as a Cadet Nurse. After that, she moved back to Cimarron to work for Dr. Jackman. Helen and Don were married in Dodge City in July 1947. They moved to Manhattan where Helen took classes and worked at Kansas Hide & Wool Co. while Don got his degree. In 1950, they moved back to Dodge City where their daughter, Donna Sue, was born. In 1952, they moved to Wichita, where they lived for 66 years. Daughter Jeanne Louise was born there in 1956. In Wichita, Helen was an active volunteer, serving as President of Carter Elementary PTA, President of the Jaycee Jaynes, and Bluebirds/Campfire Girls leader. She sang in the choir at Dellrose Methodist Church and was a member of the 20th Century Cornelias and the Kansas 99s. In 1974, her daughters grown, Helen obtained her Kansas Real Estate License. With interest rates at 13% and rising, she spent much time obtaining advanced real estate licensing and traveled the state teaching regional classes on legal and professional aspects of real estate. Helen first worked at Biltmore Real Estate, and later, Plaza del Sol and other agencies. She retired in 2015 after helping hundreds of homebuyers find just the perfect house. In 1990, she was awarded the Nestor Weig and Distinguished Service Award by the Realtors of South Central Kansas. Helen had a vibrant spirit and enjoyed music, watching basketball and baseball games, “The Wheel”, bowling (so many trophies), casinos and greyhound races (she ALWAYS won!), and family gatherings. Helen and Don loved to travel. Their last big trip was an Alaskan Cruise with Jeanne and Rick. They moved to Conroe, Texas in 2018, across the street from Jeanne and Rick’s lake house. They were grateful, as is the rest of the family, for all the attention and care this afforded them as they aged. After Don’s death, Jeanne tirelessly devoted herself to Helen’s welfare and comfort. Helen was preceded in death by her parents, her brother, and her husband. She is survived by her daughters, Donna (Rich) Kaminsky of Overland Park and Jeanne (Rick) Rhoten of Houston. Her grandchildren, Kris and Danny Kaminsky, and Chad and Jennifer Rhoten, and her great-grandchildren, Graham, Ryder, Cooper, Jacoby, and Mae. Also, her nieces and nephews, Pam, Kevin and Douglas Davis and Debbie, Theresa, Linda and Lisa Grunke. The family wishes to thank the staff of Atria Cypresswood for their excellent compassionate, attentive care. Also, gratitude and thanks to Enhabit Hospice for their support. Jenn was with her Grandma Helen on her last evening, and her last words as she began to drift sweetly off to meet Don on the other side were, “Ok, then, Bye-Bye”. So, bye-bye, you will forever be in our hearts. Visitation will be held on Sunday, August 14, 2022, from 2:00pm to 5:00pm at Cashner Funeral Home. Fond memories and expressions of sympathy may be shared at www.cashnerconroe.com for the Grunke family.
See more See Less