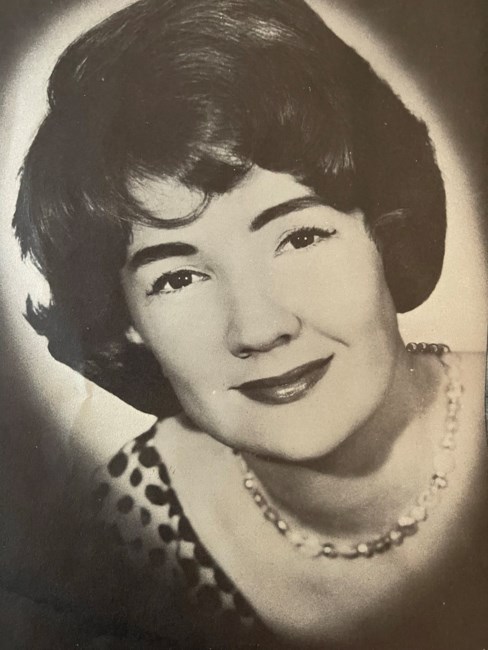 Sadie Ruth McCollum Coughlin, gifted musician, singer, beloved mother and dear friend, passed away Easter weekend on April 16th, 2022. She was 95 years young. Sadie Ruth was born for greatness in Meridian, Mississippi on March 13, 1927. Possessed with a glorious mezzo soprano voice that could be rich, menacing and comforting; she began her long career in music. At four years old she played the piano by ear for the Baptist church sitting on her mother’s lap. Music was her passion. She attended University of Alabama at age 16. Within the year she won a full scholarship to Cincinnati Conservatory of Music where she completed her undergraduate. She attended Juilliard School of Music where she worked on her master’s degree. In 1944 She was awarded Miss Metropolitan Opera. Lehman Engel, American composer and conductor of Broadway musicals, television and film, dubbed Sadie McCollum the Mezzo Soprano of the decade. She won the William Fulbright scholarship to complete her masters degree in Vienna, Austria for opera. She sailed on the Queen Mary to attend school in Europe. She studied at the State Academy of Austria and the Mozarteum in Salzburg, Austria. When she returned she pursued her Doctorate in Music from Columbia University. She performed in The Royal Opera House in London and Versailles, La Scala in Milan, the State Opera in Vienna, the Paris Opera House, the Metropolitan Opera House in NYC, the War Memorial Opera House in San Francisco, and the Lyric Opera House in Chicago. Her most beloved role was Amneris in Aida. She was asked to perform this role in Cairo, Egypt at the original opera house for which it premiered. She performed with Frank Sinatra, Elvis Presley, Billy Graham, Pearl Bailey, Dorris Day to name a very few. She starred in Hallmark Hall of Fame movies, on Broadway, at the Hollywood Bowl, the Tropicana, the Sands and the Sahara in Las Vegas. She had 32 RCA pop and classical recordings. In 1959 Sadie married Paul Edward Coughlin. They met during the war. He was a fighter pilot in WWII, who won the Distinguished Flying Cross. He heard her sing and said he would follow her across the world. They lived in NYC, Darien, Pasadena, Chicago, Nassau, Philadelphia and Dallas. Sadie was a devout Baptist but blessed many a church service throughout the Park Cities with her phenomenal voice. She was the President of the Dallas Music and Drama Club, the Texas Music and Educators Association, the DAR and the the Highland Park Book Club. Sadie was a force to be reckoned with. She guided many with her beautiful heart, her brilliant intuition and her sharp sense of humor which kept her family and friends on their toes. Known as Mama to many, she will be deeply missed by those who loved her and whose lives she so generously touched. She is survived by her beloved son Paul Bryan Coughlin, devoted daughter Judith Kenna McCabe Schnorr and her darling grandson William Walker Worthman Schnorr. A celebration of her magnificent life will be held this Saturday May 7th from 2-5 pm for family and her many dear friends in the Park Cities. Contact family for details 720-885-6476.
See more See Less

In Memory Of Mary McCollum Coughlin