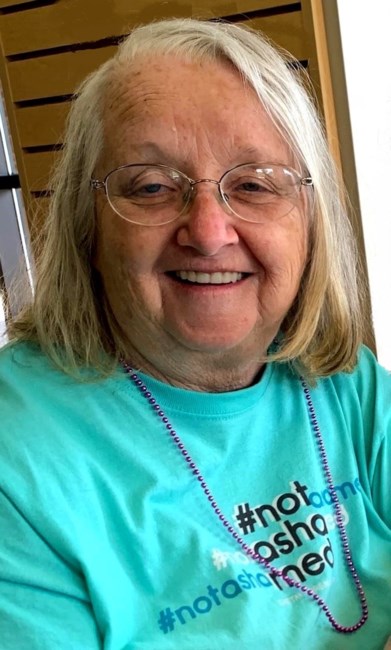 Joan Kay Peterson, born December 1, 1947, went into the presence of her Lord and Savior, Jesus Christ, on Sunday, September 13, 2020. Joan spent her childhood growing up in Riverdale, Michigan. Her days were spent swimming on the Pine River and spending time with family. Following graduation from Alma High School, she moved to Lansing and began a job at Western Union as a Teletype Operator. During those years, she enjoyed playing softball and riding her motorcycle in her free time. She met the love of her life, Thomas Peterson, on a blind date. Later, on December 27, 1969, they were married. Thomas precedes her in death. After marriage, she began a position in the Identification Department of the Michigan State Police as a Teletype Operator. She remained with the Michigan State Police until she relinquished her position shortly after her youngest daughter was born to be home with their three children. She remained at home and took great pleasure in raising their three children and being involved in their lives. She and Tom celebrated their 50th anniversary in December of 2019 and remained heavily involved in the lives of their children and grandchildren through the years. She loved her family well and took great joy in being an active part of their lives. Joan was also a longtime member of Calvary Baptist Church for over 40 years where she faithfully served in many different capacities, including Nursery Coordinator and Hospitality. Throughout her life, she selflessly gave of herself to serve others, including her family, her friends, and her church family. She was a very caring individual who loved well and was always willing and ready to serve others. Over the years, she was also known by her family and friends as a Prayer Warrior. When a concern was brought to her attention, she was well-known for saying, "Let's pray!" Left to cherish her memory is her son Randy (Angie) Peterson; daughters, Laurie Walters, and Dawn (Thomas) Phillips; and her grandchildren Chara, Nathan, Elijah, Levi, Titus, Aleia, Hannah, and Abigail. Joan is also preceded in death by her parents, Wilbur R. and Norberta J. (LaVoy) Foster; brother, Robert Foster and sister, Mary Wing. The funeral service will be held at 1:00pm on Wednesday, September 16, 2020 at Calvary Baptist Church, with visitation from 12:00pm until the time of service. Burial will follow in Gunnisonville Cemetery. Contributions in Joan's memory can be made to Calvary Baptist Church, 14769 Wood Road, Lansing, Michigan or Compassus Hospice Care of Lansing. Fond memories and expressions of sympathy may be shared at www.grdewitt.com for the Peterson family.
See more See Less

In Memory Of Joan Kay Peterson