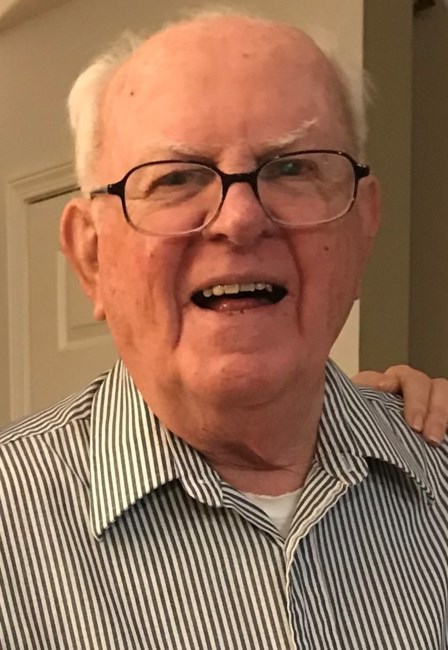 William Joseph Giguere Jr, 90, of East Hartford, passed away on Friday, May 6, 2022 at St Francis Hospital. Beloved husband of 58 years to Anna-Lou (Phillips) Giguere, he was born to William Giguere and Evelyn (Gaudette) Giguere in East Brookfield, MA. Bill is survived by his daughter, Diane Marks, and her husband Christopher, of New Port Richey, FL, a son Joseph Giguere of Palmer, MA and a son Bruce Giguere, and his wife Amie, of Tolland. He also leaves six grandchildren: Ryan Marks, Travis Marks, Lora Giguere, Katherine Giguere, Emma Giguere and Elizabeth Giguere. Bill also leaves his brother Robert Giguere, of West Brookfield, MA, sister-in-law Joanne Giguere of Westerly, RI, brother/sister-in-law Richard and Priscilla Phillips of St. Marys, PA as well as many nieces and nephews. He was predeceased by siblings and their spouses Claire (Robert) Belanger of Pensacola, FL, Lucille (Gordon) Carey of Spencer, MA, Harold (Ann) Giguere of Spencer, MA, Paul Giguere of Westerly, RI and daughter-in-law Kelly Giguere of Palmer, MA. After high school Bill served in the United States Air Force. Following his service to our country he moved to East Hartford, where he spent his career at Pratt & Whitney. Known for his light-hearted nature, kindness and for his finesse as a card player, Bill loved the sport of bowling, playing in three leagues until the onset of the pandemic. He was also a faithful communicant of St. Rose Church and St. Mary’s Church in East Hartford. Funeral service will be Saturday (May 14, 2022) at 9 am from the D’Esopo East Hartford Memorial Chapel, 30 Carter Street, East Hartford with a Mass of Christian Burial celebrated at 10 am at St. Mary’s Church of North American Martyrs Parish, Main Street/Maplewood Avenue, East Hartford. Burial with military honors will follow at Silver Lane Cemetery-Veteran’s Memorial Field #2, East Hartford. Bill’s family will receive relatives and friends on Friday (May 13, 2022) from 4 – 6:30 pm at the funeral home chapel. In lieu of flowers, memorial donations in Bill’s name, may be made to Cornerstone Foundation, P.O. Box 3, 15 Prospect St., Vernon, CT 06066-9998. For on-line expressions of sympathy to the family, please visit www.desopoeh.com.
See more See Less