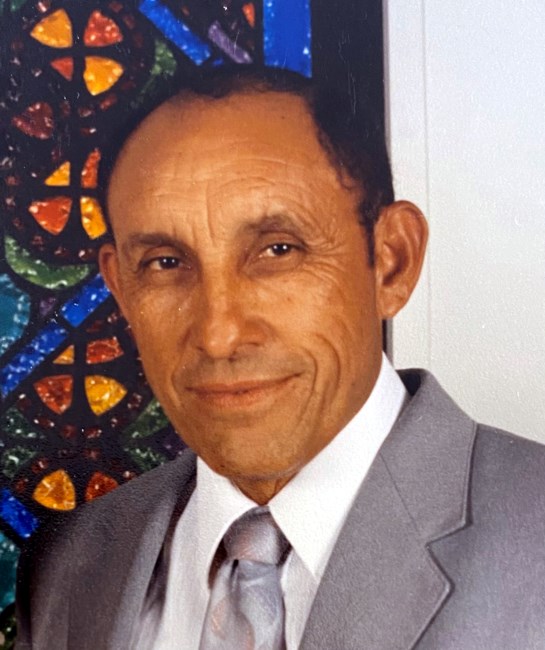 Manuel, “Manny” Acevedo age 91 went to be with our Lord God on September 13th, 2022. Manny was born on June 2nd, 1931 in the mining town of Shafter, Texas. The family moved to El Paso in 1944 and Manny became a lifelong citizen of the Sun City. He was a proud graduate of Bowie High School, class of 1950. Manny married Julieta Rivas on May 16th, 1954 and thus began a 68 year marriage relationship. The couple moved into their home in central El Paso where they remained. Manny and Julie had five children all of whom were graduates of Austin High School. Master Sergeant Acevedo served for 35 years in the United States Army and Army Reserve. He served his country overseas taking part in Desert Storm. After his service in the military, Manny began working for the El Paso Independent School District at their Center for Career and Technology Education. Manny was also very active at Our Lady of Guadalupe Catholic Church. He taught the youth in their religious formation classes, he was also a lector and member of the church choir. During his time in the Army Reserve, Manny also worked for various trucking companies in El Paso. These companies included: ICX, Braswell, Roadway, System 99, and Sun City Freight. Manny had a tremendous work ethic and was happiest when he was able to work on various projects around the house or working on projects for his family and friends. He also enjoyed various sports activities. Manny enjoyed football, baseball, boxing, and tennis. He was an avid tennis player and was able to hold his own against much younger opponents. In his final years, Manny enjoyed attending the various activities involving his grandchildren and great grandchildren. Manny is survived by his wife Julie Acevedo of El Paso; his sisters Concepcion, Maria Louisa, Yolanda, and Laura, of El Paso and Juarez; his children Patsy Aguirre of El Paso, Sylvia Brilliant and her husband Patrick of Azle, Texas, Loretta Smith and her husband Clinton of Ganado, Arizona, and David Acevedo and his wife Pam of Abilene, Texas. His grandchildren Audrey Esparza of El Paso, Amanda Mora and her husband Joel of El Paso, Armando Aguirre of New York City, Adam Aguirre of Dallas, Texas, Joseph Brilliant and his wife Laina of Valley View, Texas, Lauren Brilliant of Costa Mesa, California, David John Acevedo and his wife Kirsten of Nashville, Tennessee, Victoria Morton and her husband Chance of Lubbock, Texas, Josiah, Mathayus, and Eliana Smith of Ganado, Arizona, Megan Rios and her husband Michael of Honolulu, Hawaii. His great grandchildren Sofia, Joel, and Emma Mora of El Paso, Keawe, Rylan, and Nash Brilliant of Valley View, Texas, Miles Acevedo of Nashville, Tennessee, Tabitha and Arwen Morton of Lubbock, Texas. Manny was preceded in death by his parents, Manuel Acevedo Sr. and Eufemia Aguilar, and his son Manuel Acevedo III. Visitation will be held on Monday, September 26th, 2022 from 5:00 - 9:00 pm, with Rosary at 7:00 pm, at Funeraria del Angel Central at 3839 Montana Ave., El Paso, Texas. Funeral Mass will be celebrated on Tuesday, September 27th, 11:30 am, at Our Lady of Guadalupe Church, 2709 Alabama Street, El Paso, Texas. Interment will follow at Ft. Bliss National Cemetery, 5200 Fred Wilson Ave., El Paso, TX 79906. Fond memories and expressions of sympathy may be shared at www.FunerariaDelAngelCentral.com for the Acevedo family.
See more See Less