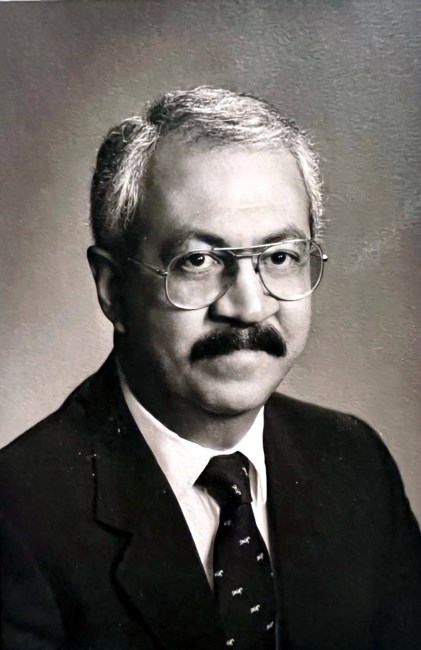 RAFAEL HINOJOS AGUIRRE, LCSW/ACSW 1937 - 2023 Mr. Aguirre passed away peacefully in his sleep on January 20, 2023. He was 85 years old. Mr. Aguirre was born to Ignacio Ortega and Teresa Hinojos Aguirre in El Paso, Texas, in 1937. As a young child, he grew up in the Silver City area of New Mexico. The third of four children, Mr. Aguirre, had many joyful memories of growing up in Turnersville. In 1940, the family moved to El Paso, where his father, an artist, and painter, owned and operated an automobile repair business. An avid reader throughout his life as a child, Mr. Aguirre could always be found with a book. He developed a love of comic books and later shared his passion for reading with his children, visiting comic bookstores on family outings. Mr. Aguirre attended Vilas and Azcarate Elementary School and graduated from Yselta High School in 1955. Outgoing and friendly, Mr. Aguirre had a unique talent for connecting and communicating in meaningful ways with anyone he met; no one was a stranger. His dream was to become a physician; however, he was intrigued by the field of psychology. Mr. Aguirre attended Texas Western College (now the University of Texas El Paso), earning a BA in psychology in 1960. He earned his Master’s in Social Work from Our Lady of the Lake University in 1964. He became a Licensed Clinical Social Worker and member of the Academy of Certified Social Workers. Mr. Aguirre began his social work career as a child protection worker in Brownsville, Texas. He then served Native American populations on the Pine Ridge Indian Reservation from 1964-1969. In the 1970s, he was the Director of Mental Health services for the El Paso State Center. Mr. Aguirre was appointed Executive Director of Family Service of El Paso in 1979, serving in that capacity until 1996. From that date until 2005, he served as a Faculty Associate in the Department of Psychiatry, Texas Tech School of Medicine, training residents in the field of marriage and family therapy. Mr. Aguirre established a private clinical practice, including consultation with several organizations until his retirement in 2019. Over his long career, Mr. Aguirre served as a mentor, advocate, role model, and instigator for the inclusion of minority individuals into the social work profession. When Mr. Aguirre began his work in El Paso, there were only three other bilingual, bicultural social workers for a predominantly Hispanic and Spanish-speaking population. He tirelessly promoted the social work profession and service to underprivileged and underserved clients in the community, encouraging Mexican American youth to study and remain in El Paso. He spearheaded the University of Texas, El Paso’s (UTEP) faculty recruiting efforts to attract and retain minority candidates in El Paso. He served on the Texas Graduate Schools of Social Work Advisory Board on Minority Curriculum, Faculty, and Students. He helped UTEP obtain the Council on Social Work Education (CSWE) accreditation, which enabled students to graduate with a bachelor’s degree in social work and pursue graduate studies if they chose. An innovative administrator, sensitive above all to client needs, he helped design and implement the residential mental health program for the El Paso State Center in the 1970s, when the closest in-patient psychiatric program was 360 miles away, providing patients the opportunity to be treated close to home and family. Active in the community, Mr. Aguirre participated on numerous boards and committees, including the Ruben Salazar Memorial Foundation, the Children’s Justice Center of El Paso, the El Paso Ad Hoc Committee on Mental Health and Mental Retardation, El Paso Center for Children, La Familia Program for the Mentally Ill, and the El Paso Independent School District Trust Fund. Mr. Aguirre was an active contributing member of the National Association of Social Workers (NASW) at the local, state, and national levels. He served on the NASW National Board of Directors (1974-1977) and the National Task Force on Minority Affairs (1979-1981). Mr. Aguirre received a Unit Award Certification for Excellence of Service in 1970 from the U.S. Department of the Interior, Bureau of Indian Affairs. He was recognized as Social Worker of the Year by the NASW El Paso Chapter in 1984. He was designated as a Master Marriage and Family Therapist by the National Association of Latino Social Workers in 1996. Mr. Aguirre is survived by his son, Rafael Parsons Aguirre (Mary), and four grandchildren: William, Isadora, Theodore, and Lincoln. As Alzheimer’s progressed, Mr. Aguirre was lovingly attended to and cared for by his beloved daughter, Teresa Lourdes Aguirre. His many nieces and nephews will miss their long conversations with their Uncle Ralph and the many stories he shared at the extended family’s annual camping trips to Lake Roberts, New Mexico. He is survived by his siblings Maria Teresa Aguirre of Corpus Christi, Texas; Ignacio H. Aguirre (Elida) of Dallas, Texas; and Alberto H. Aguirre of El Paso, Texas. Now at rest, Mr. Aguirre is reunited with his beloved wife of 47 years, Pamela Parsons Aguirre, his devoted parents, and his sisters-in-law, Patricia Armendariz Aguirre and Catherine Webber Aguirre. He will always be remembered as a tireless advocate and champion for individuals and families in need, a mentor to countless students and social workers, and a caring therapist to his patients whom he has supported over the years. Most importantly, to his family, he was a loving, kind and unique individual. He touched many, many lives and will always be remembered for his warmth and compassion, his ready smile, and the mischievous twinkle in his eye. A rosary will be held Friday, January 27, 2023, at 6 PM at Evergreen East Funeral Home, with a church service at Holy Family Catholic Church on Saturday, January 28, 2023, at 10 AM. Family and friends are invited to visit the funeral home on Friday from 4 PM to 6 PM. In lieu of flowers, donations may be made in Mr. Rafael Aguirre’s name to El Paso Center for Children at https://epccinc.org/donate/ Fond memories and expressions of sympathy may be shared at www.evergreenfheast.com for the Aguirre family.
See more See Less

In Memory Of Rafael Aguirre