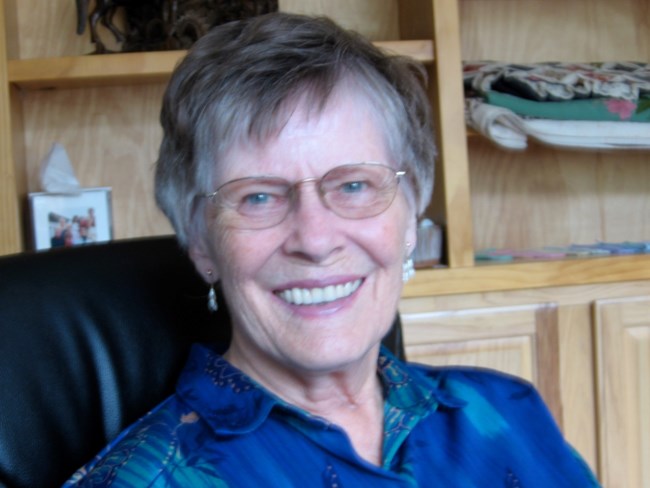 Jacelyn Leigh (Leonard) Stephenson was born February 28, 1930 on her parents’ farm in Fairbury, Nebraska. She pursued her childhood passion to become a registered nurse, graduating from Lincoln General School of Nursing in 1950. She then spent the next four decades in the helping professions, working as a nurse, minister’s wife, and teacher. Jackie and her husband, Keith, were married on June 15, 1952, and would have celebrated their 69th wedding anniversary this year. They were the parents of three children, David of Laramie, WY; Robert, married to Debbie, of Overland Park, KS; and Shelley, married to Keith Brown, of Tempe, AZ. She was a loving mother and grandmother to four grandchildren, and one great grandchild, supporting each in their individual interests and passions. Supporting Keith’s educational and clergy career, Jackie nursed, taught, and ministered to others all over the United States, as well as in Indonesia. Upon graduation from her nursing training, she had been asked to work for two leading doctors in Lincoln as an office nurse, and then proceeded in her career to nurse in various fields of specialty. As head nurse in OB-GYN, she was honored by the student nurses as Lincoln General Hospital’s outstanding nurse. Later, while Keith took up further education and interim ministries, she served as a minister’s wife with grace and perfection. She continued working full-time as a nurse in various institutional settings until the family’s transition to life in Indonesia. There, where she and Keith lived for ten years, she was asked to teach English as a Second Language, with prospective students clamoring to get into her classes. Jackie’s transition to teaching had been a natural extension of her devotion to caring for others. Jackie and Keith retired to Estes Park, Colorado in 1991. In Estes Park, she found joy in her family, St. Bartholomew’s Episcopal Church, her quilting circle, hiking, cooking, music, and reading. In addition to her husband, children, grandchildren, and great-grandchild, Jackie is survived by her sister Donna, as well as five nieces and nephews, and numerous grand- and great-grandnieces and nephews. She is missed by all of her family members, as well as by friends and former students around the US and abroad. On April 3, 2021, in the evening, Jackie Stephenson passed away peacefully in her home, surrounded by her immediate family. Gifts in Jackie Stephenson’s name may be directed to St. Bartholomew’s Episcopal Church or Rocky Ridge Music Center. To leave a message for the family www.allnuttestespark.com
See more See Less

In Memory Of Jacelyn Stephenson