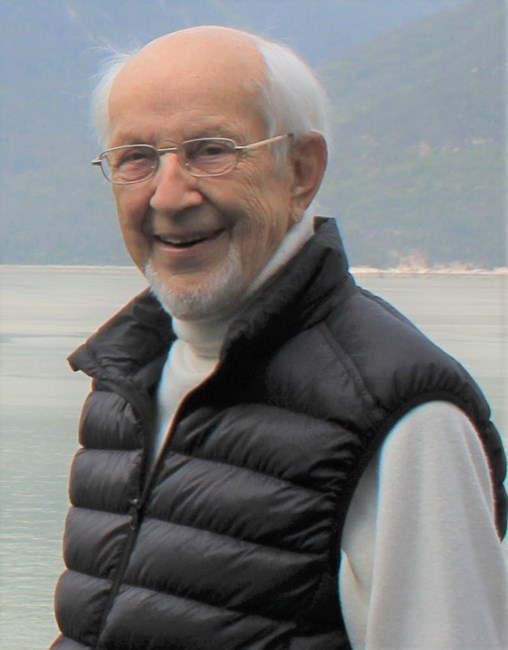 Keith Dwain Stephenson was born on June 3, 1929 in Burwell, Nebraska. Both his parents were ministers, working out of Christian Church-Disciples of Christ churches in Nebraska and Colorado. Keith followed in their footsteps, pursuing a life devoted to ministry as well as to academia, as a professor and scholar of the New Testament. A 30-year resident of Estes Park, CO, Keith passed away peacefully on September 14, 2022 at the age of 93. Keith was a devoted husband to his adored wife Jacelyn Leigh (Leonard) Stephenson, who predeceased him on April 3, 2021. He is survived by three children – David of Laramie, WY; Robert, married to Debbie, of Overland Park, KS; and Shelley, married to Keith Brown, of Tempe, AZ – and by four grandchildren and one great grandchild. To all of his family members, both near and far, Keith combined affection, playfulness, and unwavering love and attention. Keith had a long career in ministry and higher education. Following undergraduate work at the University of Nebraska and Phillips University, he received an M.Div. from Yale University and a Ph.D. from Duke University. As the Rev. Dr. Stephenson, he ministered to churches and campus communities in Nebraska, Connecticut, and Colorado, before joining the faculty of Cotner College in Lincoln, NE, where he taught until 1976. He and Jackie were then given the opportunity to serve their denomination’s Division of Overseas Ministries in Indonesia. For the next ten years, they lived and taught in the town of Tomohon, Sulawesi Utara, where they built a large and international group of loyal students, colleagues, and friends who have continued to share with them their lives and families to this day. Upon returning to the US, Keith served an interim ministry in Wray, CO, before retiring to Estes Park in 1991. He served as board member and supporter of several organizations including Rocky Ridge Music Center and St. Martin’s Chamber Choir. A lifelong supporter of human- and social justice-focused causes, Keith also volunteered with Rocky Mountain National Park, Estes Valley Library, and Good Samaritan Society-Estes Park Village. He was an avid hiker, and outpaced younger family members well into his 80s. Woodworking was a special passion and skill: Keith crafted dozens of beautiful objects for family, friends and the institutions he valued. His work graces St. Bartholomew’s Episcopal Church and Rocky Ridge Music Center; and he was especially proud of the harpsichord he made for Jackie in Indonesia, which had a central role in the musical gatherings they hosted there. Keith continued his academic research in his later years, including work on an English/Greek pocket interlinear Bible, translated into Indonesian with the help of a former student. He was also writing a memoir which, at his death, totaled 162 chapters. In both his professional and personal pursuits, Keith was curious, irreverent, humane, skeptical of dogma, and open to new ideas, whoever they came from. His life was a rich intellectual and spiritual journey that brought light and warmth to all his fellow-travelers. Married on June 15, 1952, Keith and his bride Jackie had together celebrated 68 years of marriage. They enjoyed a grand and abiding love. Prior to his recent illness, Keith had planned to honor Jackie’s memory with a requiem mass. Now following Keith’s passing, the service will be dedicated to the memory of both Keith and Jackie. The Rite of Christian Burial and Requiem for Jacelyn L. and Dr. Keith D. Stephenson will take place at St. Bartholomew’s Episcopal Church at 11:00 am MT on Saturday, October 8, 2022. Participants unable to attend in person may livestream the service, or watch a recording afterwards, via the Youtube link at the bottom of St. Bart’s website at: https://www.stbartsepiscopalchurch.org/ . Donations in Keith’s name may be made to Rocky Ridge Music Center or St. Bartholomew’s Episcopal Church. To leave a message for the family www.allnuttestespark.com
See more See Less

The Rite of Christian Burial and Requiem for Jacelyn L. and Dr. Keith D. Stephenson