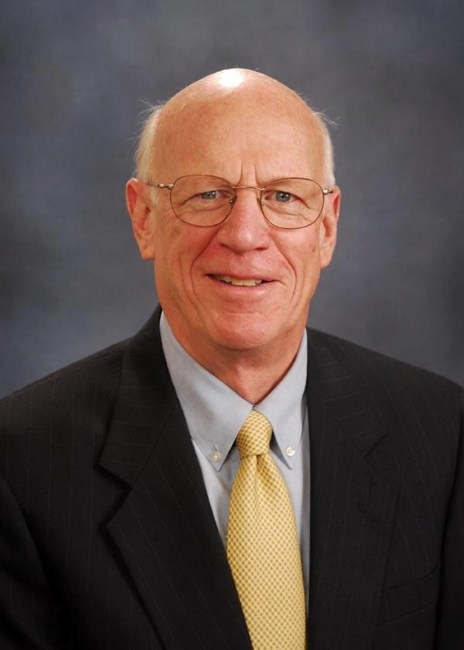 Martin Brownlow Dickinson, Jr. died January 5, 2020 at his home in Estes Park, CO in the company of his family. He was born April 13, 1938 in Kansas City, MO, the son of Martin B. Dickinson, Sr., and Ruth Van Riper Dickinson. His parents were graduated from the University of Kansas (KU) and its Law School (KU Law), the latter in 1928. Both of his grandfathers were also lawyers, and his grandmothers were involved in public education, in Dodge City, KS and Independence, MO. Martin spent his childhood in Kansas City, MO and graduated from Southwest High School in 1956. He was graduated from KU in 1960, majoring in Political Science. He was a member of Phi Delta Theta fraternity. At KU, in a math class Martin happened to sit behind a woman from Salina, KS named Mary Ann Mize. He married her in August 1960. He continued his education in Political Science at Stanford University, from which he received a Masters in 1961. Martin and Mary Ann then moved to Ann Arbor, Michigan where she obtained a Masters in Chemistry and worked for Parke-Davis, and he obtained a JD from the University of Michigan in 1964. He was Editor-in-Chief of the Michigan Law Review and began to develop the interest in tax law that would become his career. After three years of law practice in Colorado with the firm of Holme, Roberts, and Owen, Martin joined the faculty of KU Law. He served on the law faculty for 48 years, becoming the longest-serving faculty member in KU Law’s history. At the age of 33, Martin was named Dean of KU Law, a position he held from 1971-1980. As Dean, Martin orchestrated the funding and planning of New Green Hall, occupied by KU Law in 1977. During his deanship numerous new faculty were hired, and the racial and gender diversity of both the faculty and the student body broadened dramatically. The scholarly productivity of the faculty increased as well. By the early 1980's KU Law ranked fourth in the nation for scholarly productivity, following only Chicago, Stanford, and Harvard. After his tenure as the Dean of KU Law, Martin returned to teaching and writing, as well as private law practice. He received the KU Chancellor's Award for Excellence in Teaching (1988), the KU Law School’s Immel Award for Teaching and Excellence (1997), and a Kemper Fellowship for Teaching Excellence (2002). The KU Law Moreau Award for Student Counseling was awarded to him (1988, 1995, 1997, 2009). He also taught at the University of Michigan and the University of Colorado, and in study abroad programs in London and Istanbul. Martin chaired the Law School Accreditation Committee of the American Bar Association. He often said he felt very fortunate to have found a career that engaged him so much and that he considered it a great privilege to teach the law students. Martin authored or edited dozens of books on taxation and estate planning–some used as texts at more than 120 law and business schools across the country. In recognition of this and other scholarly efforts, he was named to the Robert A. Schroeder Distinguished Professorship in 1986. Martin lectured extensively on estate planning and taxation. He received the American Bar Association's Harrison Tweed Award for Excellence in Continuing Legal Education. The Kansas Bar Association awarded him the President’s Award for Outstanding Service and the Phil Lewis Medal of Distinction. Martin’s many years of service to Kansas were recognized when he received the KU Steeples Service to Kansans Award. For 22 years Martin practiced as Of Counsel with the Lawrence law firm of Barber Emerson, and was listed in the taxation and trusts and estates categories of The Best Lawyers in America. He was elected to membership in the American College of Trust and Estate Counsel and the American College of Tax Counsel. Martin’s years in Lawrence with Mary Ann also involved raising his two children. He was an engaged and enthusiastic father, committed to their education. He was an avid reader of history and an opera fan. His children remember many meticulously planned family trips to historical and cultural sights and national parks. His son Jim felt fortunate that despite his father’s busy life he always found time to do an activity with Jim and Nancy at the end of the day. Martin was widowed in 1996 when his first wife Mary Ann died. He married Sallie Francis in 1998 and she joined him in Lawrence, KS until their recent full-time move to Estes Park, CO. He had been drawn to the Estes Valley and Rocky Mountain National Park since his childhood. In his later years with her, their common love for travel and hiking in the Swiss Alps and the Colorado mountains provided for many shared experiences with family and friends. He had a thirst for knowledge that went beyond tax law. He was a voracious reader of history and anything informative. With his grandchildren he was an adventure guide, constant educator, formidable chess opponent and ever present cheerleader. Martin is survived by his wife of 21 years, Sallie Francis Dickinson, a daughter, Nancy Dickinson, a son, James Dickinson, two grandchildren, Olivia Dickinson and Evan Dickinson, all of Colorado; a step-son, Christopher Nelson of Colorado and a step-daughter, Sarah De Rivaz of Switzerland; a sister, Margaret Schnackenberg of Glenview, Illinois; and seven step-grandchildren of Colorado and Switzerland. Martin will be missed enormously by all of us who benefitted from his teaching, wisdom, kindness, guidance and sense of adventure. A memorial service will be held at St. Andrew’s Episcopal Church in Kansas City, MO on January 30, 2020 at 1:30 pm. The family suggests donations to: KU Endowment, in support of the Dean Martin B. Dickinson Teaching Award www.kuendowment.org/givenow Hospice of the Estes Valley, Rocky Mountain Conservancy in care of Allnutt Funeral Service 1302 Graves Ave, Estes Park, CO 80517.
See more See Less

In Memory Of Martin B Dickinson Jr.