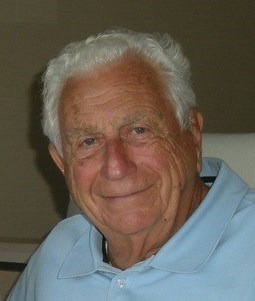 Edward “Ed” C. Rubatino was born in Everett, February 5, 1931 to Henry and Florence Rubatino and died peacefully, at home, June 28, 2022. Ed grew up in Everett and Lake Stevens, attended grade school at Our Lady of Perpetual Help, high school at St. Martin’s in Lacey, and college at Seattle University. He served in the Coast Guard, eventually retiring after achieving the rank of Commander. His time serving in the Arctic aboard a buoy tender and light icebreaker left a bevy of stories that he would happily recount anytime the conversation topic turned toward salt water. In 1957, he joined his father to help run the family business, Rubatino Refuse Removal. He actively helmed the company into his nineties. Business was, as he frequently put it, “picking up!” As a proponent of useful recycling, he recounted stories of horse-drawn carriages emptying out coal furnaces in Everett and the waste would be used to fill potholes in the city’s streets. He took great pride in being a part of the service industry in Snohomish County and instilled pride and a sense of duty in countless family members who worked on trucks, in the recycling operations, in the shop, or in the office through the 60-plus years he helped to lead the company. Ed loved to spend time with family and friends on the water, at family dinners in Lake Stevens, at Tulare Beach, Sun Valley, Maui, or while fishing. He loved traveling to Asia, Europe and St. Barts with his wife, MariLana. He was an avid boater and spent many summers traversing the San Juan Islands and Canadian Gulf Islands with occasional trips further north to Desolation Sound, through the Inside Passage, and even to Alaska. His boating habit started young. Together with his younger brother, Fran, they would rent an open 14-foot boat with little more than an outboard and a handheld compass to chase salmon on Puget Sound. Later, the family purchased a wooden skiff, the H. Rubatino, for use on Lake Stevens. They skied behind it on homemade water skis. He was an active member of his community and a generous supporter of numerous community organizations, with both time and resources. He was a long-time member and past president of the Everett Rotary Club. He also served on numerous boards, including the boards of the Washington Refuse and Recycling Association, Catholic Community Services, Hospice, Snohomish County Solid Waste Advisory Council, and the Tulare Beach Association Board. His dedication to the Everett and Snohomish County area was also illustrated by his long-time support of the Providence Foundation, Providence Hospice, St. Mary Magdalen and St. John’s Parish, and numerous other philanthropic organizations in the region. While generous, the deep-seated nature of his “Genovese frugality” stayed with him until the very end. With rare exceptions, he eschewed the “finer things” in life and would rather pack his clothes in a grocery bag than a piece of luggage. He was known to look a bit perplexed at the suggestion of bringing more than one undershirt on a 5-day trip! Ed was preceded in death by his brothers Francis and Henry Rubatino, his sister Amelia Volpone, and first wife Eileen. He is survived by his wife of 25 years, MariLana, and daughters Rose (Larry) Goulet and Shelly Rubatino and grandsons Denny (Delaney) Goulet and Dave (Erin) Goulet, and three great-grandchildren, Stella, Ruby and Benton, and one on the way, as well as MariLana’s children, Lisa (Mark) Caputo, Kristin (Steve) Smith, Matt (Stacy) Sweeney, and their families, as well as numerous nieces, nephews, and cousins. He was Big Bop-Bop to MariLana’s grandchildren, Jackson, Mackenzie, Ki-Ki, Logan, Samantha, Tucker, Luke and Boden. He will be missed but his spirit will live on through the actions and words of those he touched. In lieu of flowers, remembrances can be made to The Rubatino Family Scholarship Fund at the Everett Rotary Club, The Coast Guard Auxiliary or Catholic Community Services. Funeral services will take place at St. Mary Magdalen 8615 7th Ave SE Everett, WA 98203 on August 27th at 10:30 am. Reception to follow at Everett Golf and Country Club 1500 52nd St SE Everett, WA 98203 (www.Evergreen-FH.com)
See more See Less

In Memory Of Edward Carlo Rubatino