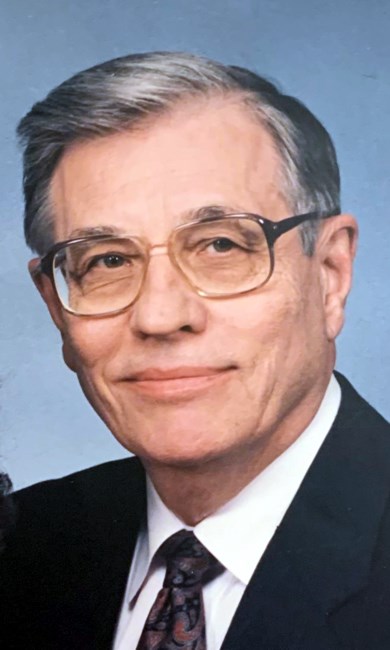 Paul Andrew Steiner, 92, stepped peacefully into heaven to meet his Lord and Savior Jesus Christ on Sunday, February 28, 2021. Born in Woodburn, Indiana, on February 17, 1929, he was a graduate of Bluffton High School in Bluffton, Ohio, Class of 1946, and Taylor University in Upland, Indiana, Class of 1950. Paul retired as Chairman and President of Brotherhood Mutual Insurance Company in Fort Wayne, Indiana, today the second largest church insurer in the U.S., insuring over 65,000 churches and related ministries in 47 states and the District of Columbia. Paul served as Brotherhood’s President from 1971 to 1994, as well as Chairman of the Board until 1999. In 1972, Paul earned the Chartered Property and Casualty Underwriter (CPCU) professional designation. Throughout his life, Paul was honored to serve in leadership in a variety of organizations and boards, including: Fort Wayne Rescue Mission, Christian Business Men’s Committee (CBMC), Rotary Club of Fort Wayne, National Association of Evangelicals (NAE), National Association of Mutual Insurance Companies (NAMIC), American Bible Society, Summit Christian College (formerly Fort Wayne Bible College), and Taylor University. Paul was named NAE Layman of the Year in 1977 and elected Chairman of NAMIC in 1985. In 2016, he and his wife, Ruth, received the President’s Medallion Award for service to Taylor. He was also active in CBMC, giving testimony of his faith in Christ throughout the Midwest. Paul served as Chairman of the Board of Summit Christian College, which merged with Taylor to form Taylor University Fort Wayne in 1992. Paul met the love of his life, Ruth Henry, while at Taylor, and they were married in Newark, New Jersey, at the Christian and Missionary Alliance Church on September 1, 1950. While at Taylor, Paul received a bachelor’s degree in Psychology and was a member of the University’s Varsity Quartet. The Varsity Quartet performed music and shared their testimonies at churches throughout the Midwest as ambassadors for Taylor. In 1951, Paul and Ruth moved to Bluffton, Ohio, where Paul entered the family feed mill business and later started Steiner Building & Lumber Company and Gold Leaf Mineral. In 1964, Paul joined Brotherhood Mutual in Fort Wayne and enjoyed an insurance career spanning four decades. Paul was a lifelong member of the Fellowship of Evangelical Churches (formerly the Evangelical Mennonite Conference) and expressed his love for the Lord in various leadership roles and with his musical talents in the church. In all of these life events and accomplishments, Paul was motivated by his desire to faithfully serve the Lord Jesus and to give the glory to God. Paul is survived by his wife of more than 70 years, Ruth Edna (Henry) Steiner; son, Rev. Mark H. Steiner (Deborah); daughter, Nancy R. Keller; and sons, Jonathan P. Steiner (Janet), and David R. Steiner (Elizabeth); grandchildren, Thomas, Marie (Mark), Ruth, Andrew, Daniel (Sara), Hope (Daniel), Matthew (Katheryn), Jonathan, Luke, John and Timothy; and great-grandsons, Quinn and Judah. He is also survived by his brother, Rev. Dr. Richard Steiner (Marilyn); and sisters, Carolyn Rowell and Sharon Connor. He was preceded in death by his parents, Rev. Eli G. Steiner and Emma M. (Yaggy) Steiner; sisters, Phyllis McCoy, and Wilma Petersen; and a son-in-law, Eugene Keller. Visitation will be from 2 to 5 and 6 to 7:30 p.m., Friday, March 5, 2021, at Brookside Church (6102 Evard Road, Fort Wayne). Masks are required. Funeral Service will be held at 11 a.m., Saturday, March 6, 2021, at Brookside Church, with visitation one hour prior. Graveside Committal and burial will follow at the Evangelical Mennonite Cemetery, Old US Hwy 24, 0.2 miles west of Bull Rapids Road, Woodburn. Preferred memorials are to The Paul and Ruth Steiner Endowed Scholarship Fund at Taylor University, Fort Wayne Rescue Mission, or Brookside Church. Arrangements by Hockemeyer & Miller Funeral Home, 6131 St. Joe Rd., Fort Wayne. For online condolences visit https://www.dignitymemorial.com/obituaries/fort-wayne-in/paul-steiner-10078076.
See more See Less

In Memory Of Paul Andrew Steiner