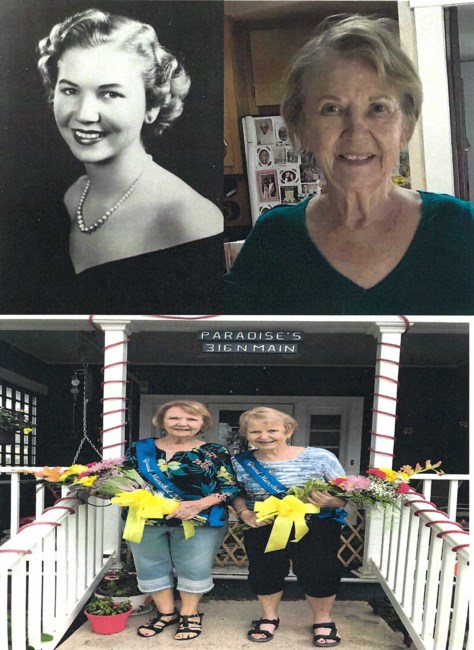 Florence Marie Paradise (Wallace) September 16, 1934 To October 27, 2020 Florence was born September 16, 1934 at Saint Francis Hospital , Colorado Springs, Colorado to Fred Robert Wallace and Margaret Quinn Wallace both natives of Colorado. Fountain, Colorado was her home for 86 years. Florence graduated from Fountain High School in 1952 and attended college in Pueblo, Colorado . She married Duane Francis Paradise in 1954 and together they had three girls: Peggy Johnson, Sheri Paradise, and Jean Paradise-Slade. Florence was committed to enriching the City of Fountain, she served as the President of the Economic Development Committee of Fountain, was an active member of the Fountain Valley Chamber of Commerce, and most recently, was a founding member of the Fountain Valley Historical Society. In addition to serving her community she also volunteered at St Joseph's Catholic Church for 14 years. Florence was a vibrant, intelligent woman and mother. In her early years she was part of a dance group called the Raidettes. She was dedicated to attending and supporting the Performing Arts. Family members aspire to live and model their own lives as she did with passion for living life to the fullest and deep love of her family. As a natural entrepreneur, work was a source of dignity and pride for Florence. She had many jobs starting at age 14, served as a United States Postal Service clerk for over 30 years and even began her own business, Paradise Liquor Store, in 1974. In 1983, Florence was awarded the Colorado Retailer of the Year from the National Association of Beverage Retailers. Her sister Peggy King was her best friend and companion during her life. They traveled the world together, volksmarching in every state and backpacking several foreign countries. They skied at every resort in Colorado and Utah. They traveled to Ireland where they met many relatives at a Quinn reunion in County Galway, Ireland. There were over 150 Quinns present. A Celebration of Life will be held when friends and family can be together safely. A Mass of Intentions and Repose of her Soul will be offered by her family on November 8@ 11:30 by Father Ron Raab at Sacred Heart Church in Colorado, Springs, Colorado. Donations can be sent to Saint Judes Children’s Research Hospital in memory of Florence Paradise: P.O Box 474 Memphis TN 38101 Or Sacred Heart Church She is survived by her three children, Peggy Johnson (Paradise) Sheri Paradise and Jean Paradise-Slade, her son-in-laws: Mitch Johnson and Dale Slade, as well as her six grandchildren and ten great-grandchildren and her sister, Peggy King and Quinnie; her beloved pet dog.
See more See Less

In Memory Of Florence Marie Paradise