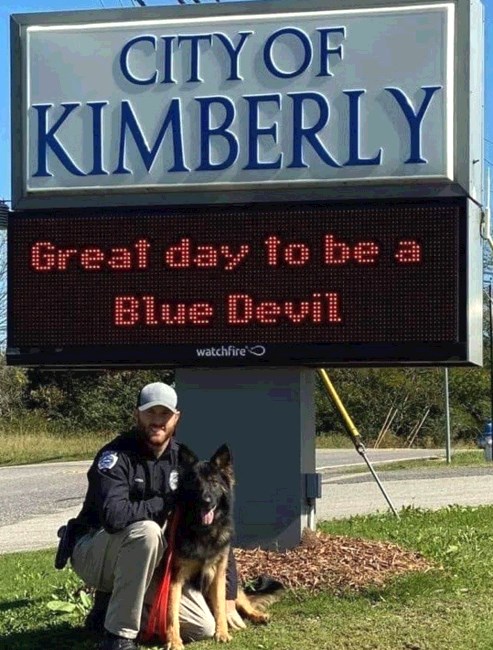 K-9 Officer Nick O’Rear, age 33, of Morris, Alabama passed away on Wednesday February 5, 2020. Nick was born January 6, 1987. Nick is survived by his parents Daniel and Kelly O’Rear, sister, Ashley O’Rear Blankenship (Chad); his children Everlee Rae O’Rear, Briar Daniel O’Rear and Weston Nicholas Charles O’Rear; and his canine partner, Stella. Nick is also survived by his aunt Mickey O’Muse (John); uncle Danny Bowen, aunt Tammy O’Neal, aunt Duska Powell, Uncle Pat O'Rear(Bonnie) and grandmother Agnes O’Rear Jackson, cousins, Ronnie Bowen (Kristi), Jon Bowen (Tammy), Jay O’Rear (Holly), Tommy Powell (Stacey), Taura Powell Glenn, Heather O’Neal, Jennifer VanHaasen (Xavier) and a whole host of other cousins. Nick is proceeded in death by grandparents Billy and Carolyn (Jo) Powell, grandfather George O’Rear Jr, aunt Carolyn Powell Bowen and cousin Andy Bowen. Nick graduated from Saint Clair County High School in 2006. He was also a Graduate of the Alabama Fire College – Tuscaloosa and a graduate of the UAB EMT School. He worked as a firefighter for the cities of Margaret and Branchville. Nick started his law enforcement career after he graduated from the Northeast Alabama Law Enforcement Academy, Class 174. He served as a Police Officer for Ashville, Alabama, Trafford, Alabama, and was a K-9 Officer for Kimberly, Alabama. Nick was also a ham radio operator. Not only did he serve as a police officer, he owned and operated Southern Lawn Care and Xtreme Pressure Washing LLC. He was an ordained Minister and he married his sister Ashley and brother-in-law, Chad. Nick had so many accomplishments, when he put his mind to something, he did it. He always had a smile on his face, and it lit up a room. He never met a stranger. He had a big heart and he loved big. He was also quite the jokester, he always knew how to make you laugh. A visitation will occur Monday, February 10, 2020 from 10:00 AM to 12:00 PM at Gardendale First Baptist Church, 316 Mountain Crest Parkway, Gardendale, AL 35071. A celebration of life service will occur Monday, February 10, 2020 at 1:00 PM at Gardendale First Baptist Church, 316 Mountain Crest Parkway, Gardendale, AL 35071. A graveside service will occur at Jefferson Memorial Gardens, 1591 Gadsden Hwy, Birmingham, AL 35235. Fond memories and expressions of sympathy may be shared at www.ridoutsgardendalechapel.com for the O’Rear family.
See more See Less