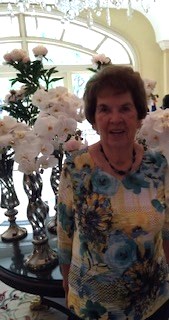 Lawanna Doman, 91, passed away at home in San Dimas on January 15, 2022. Lawanna was born in Tooele, Utah on February 5, 1930 to Grant and Rhea Terry. She was the oldest of 4 children. During her childhood she lived in Montana and Utah. In 1947, after graduating from high school in Utah, Lawanna moved with her family to Southern California. Lawanna met Phillip in 1951 and they married in 1952. Lawanna and Philip were married for 51 years prior to his passing. Lawanna was also preceded in death by her brother (Von) and her sister (Maurine). Lawanna is survived by her sister (Sharon), her daughter (Ronda) and son-in-law (Gary), two grandchildren (Casey and Kristen) and two great-grandchildren (Taylor and Riley) as well as many nieces, nephews, cousins and friends. Before retiring in 1992, Lawanna worked at her own business doing taxes and bookkeeping. Lawanna loved her church, being with family and friends, traveling and enjoyed her yard and flower garden.
See more See Less

In Memory Of Rhea Lawanna Doman