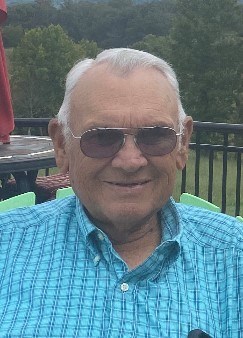 Eugene Crum, 83 passed away July 31st, after a brief illness and complications with diabetes and cancer. He was born on April 12, 1939, to the late Grady and Irene Crum of Greene County. Gene retired from Plus Mark in Afton, was a lifelong farmer and tremendously enjoyed driving a dump truck and meeting people all around East TN the last several years. He was a man of tremendous faith and lived his life serving others. His weekly highlight was spending time with or watching his church families from home or the hospital. He enjoyed life, family and friends while always being able to brighten the lives of others. Although he struggled with an awful illness, he continually made references to his future healing and was grateful to be entering his Lord and Savior’s arms. Gene attended Greeneville First Church of God for most of his life along with People’s Tabernacle while alongside his wife, Nanny. He is survived by his wife Annette “Nanny" Crum, daughter Anita Ricker and son Mike (Julia) Crum. Stepdaughter Lynnette (Steve) Malone, Stepson David (Holly) Brooks. Grandchildren: Casey Ward, Hayley (Kaleb) Pitt, Dustin Crum, Heath & Rachel Crum, Anna Brooke (William) Bowers, Dallas (Michael) Ball, Dillon & Dalton Brooks. Great-grandchildren: Zander & Carson Ward, Parklynn Pitt, Brooks & Addilynn Bowers, Joshua & Titus Ball. Sister Colleen (Fred) Daniels and nephew Brad Daniels. Gene was preceded in death: Wife Mary Lou Crum, Son David Crum & Daughter in law, Angela Crum. Visitation will be at Kiser-Rose Hill Funeral Home on Tuesday 8/2 from 2-4 and 5-7 with the service to follow at 7. Interment will be at 11:00 Wednesday 8/3 at River Hill Cemetery. Family and Friends are asked to gather at the funeral home at 10:00 to go in procession to the cemetery. Pastor Nathan Leasure - Greeneville First Church of God and Reverend David Tweed – People’s Tabernacle will officiate. Pallbearers: Dustin Crum, Heath Crum, Brad Daniels, Dillon Brooks, Dalton Brooks, Brooks Bowers & Sammy Brooks. Honorary: Employees of Brooks Excavating and Brooks Malone. The family wishes to extend a most grateful thank you to DaVita Dialysis Center, Durham Hensley Nursing Home along with the Doctors and staff of the 5400 wing of Johnson City Medical Center. A special appreciation to the many friends who called and checked on Papaw Gene. In lieu of flowers memorials may be sent to Greeneville 1st Church of God, 1505 W Main St, Greeneville, TN 37743 or Peoples Tabernacle Church, 2442 Asheville Hwy, Greeneville, TN 37743. Online condolences may be sent to the Crum family at www.kiserrosehillfuneralhome.com
See more See Less

In Memory Of Grady Eugene Crum