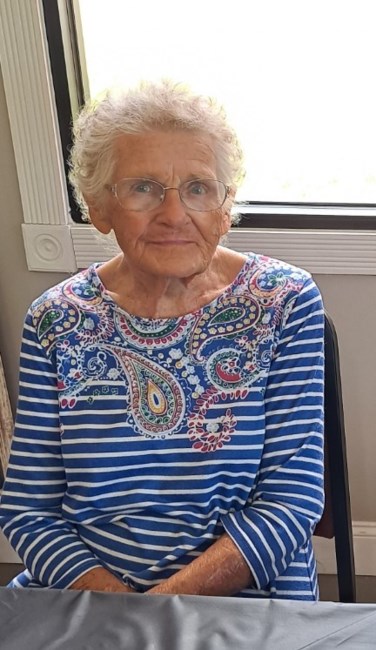 Jackie Eutella Arnott Cox affectionally known as “Mammaw Jackie” to many, age 88 of Mosheim, entered into the Lord’s rest Sunday, January 22, 2023. She retired from Magnavox after 45 years of service. She enjoyed her volunteer work at Signature Healthcare, doing birthday parties and visiting with patients in their rooms. Jackie was of the Baptist faith. Jackie is survived by her children, Danita and Bill Bailey and Donna and Charles Ervin of Mosheim and Sharon Cox of Philadelphia, Tennessee; grandchildren, Craig and Beth Cox, Chad and Shelby Bailey, Kenny and Shelly Cox, Angie and Russell Hensley, Mindi and Tony Ferrell, Miranda and Curtis Castle; great grandchildren, Brittany Cole, Tyler Bailey, Jacob Hensley, Morgan and Steven Davis, Jada and Dustin Hensley, Noah Cox, Breanna and Grant Munafo, Taylor Cox, Olivia and Stephen Osborne, Bethanie Ferrell, Brooke and Dakota Wagers, Tori Bailey, Layne Ferrell and Baylee Ferrell. Also surviving are great great grandchildren, Preston Bailey and Carson and Kelsie Munafo as well as a sister, Bessie Lowery; special friend Thomas McCurry; nieces, nephews, friends and neighbors of the Gilbreath community. She was the daughter of the late Samuel and Maude (Turner) Arnott, and she was married to the late Homer Lee Cox for 50 years. Jackie was also preceded in death by a son, Danny Cox; brother, Minnis Arnott; sisters, Earline Cook, Georgie Woodworth, Ruby Barnard, Delsia Carter, Ruth Brown and Shirley Mathes. The family will receive friends on Wednesday from 4 – 7 pm at Kiser-Rose Hill Funeral Home. The memorial service will follow at 7 pm with Ministers Charles Ervin, Tony Ferrell and Grant Munafo officiating. A graveside service will be held on Thursday, at 11 am in Mt Sinai Cemetery. Family and friends are asked to meet at the cemetery at 10:45 am for the service. Pallbearers are grandsons and great grandsons. The family wishes to extend a special thanks to UT Home Health and Hopsice for the care and attention given to our mother and grandmother. Kiser Rose Hill Funeral Home 125 Idletime Drive, Greeneville, TN, 37743 423-636-8007
See more See Less