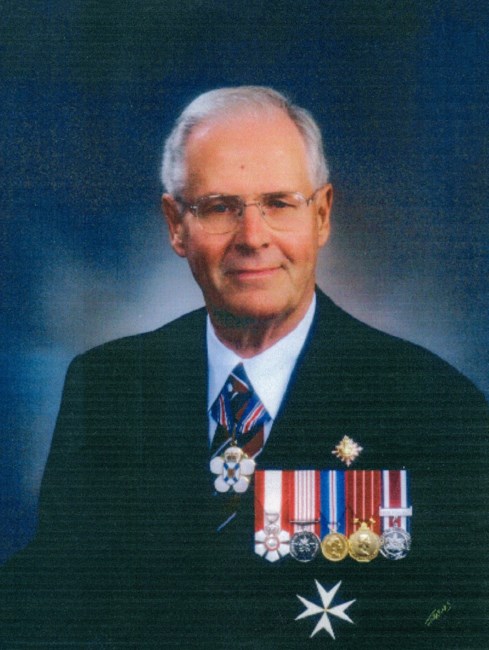 HON. ALAN R. ABRAHAM, CM, IOW, ONS, DENG, DCL, FICD, KM One of the most distinguished Nova Scotians of his generation, former Lieutanant Governor of Nova Scotia the Hon. Alan Rockwell Abraham, died peacefully at the age of 89 on Friday, October 2, 2020, surrounded by his children, Louise Abraham-Pace (Robert Pace); Alan Abraham Jr. (Janet Merrithew); and Robert Abraham. H was predeceased by his truly beloved wife and partner of 58 years, Rose Marie (Belliveau) Abraham. Alan was born in Halifax on February 1, 1931, the son of James David Abraham and Marie Louise (Rockwell) Abraham. He was the middle child of three, remaining close to his siblings, the late James Abraham and Ann Smith, throughout their lives. Together, they grew up in the midst of a large, loving and extremely lively Scotch-Irish extended family. Alan was educated at Oxford School in Halifax's west end and then at Saint Mary's University High School. He was an engineering student at Saint Mary's University until his father’s sudden and early death meant Alan needed to leave school to work to help support his family. Alan’s active curiosity and keen intellect made him a lifelong learner, later studying corporate governance at the Richard Ivey School of Business at Western University. Alan was recognized with two honorary degrees— a Doctor of Engineering from Dalhousie University in 1984 and a Doctor of Civil Laws from Saint Mary’s University in 2002. Alan’s first job was as a construction supervisor with Atlantic Bridge Company. He was next in the engineering department of the City of Halifax, before becoming president and CEO of Maritime Warehousing and Transfer, a position he held from 1965-1984. He left when he was appointed Lieutenant Governor of Nova Scotia by then Prime Minister Pierre Elliott Trudeau, who felt that Alan’s military service as a Commanding Officer (Lieutenant Colonel) of the Princess Louise Fusiliers, combined with his business and volunteer experience, made him an excellent choice for the role. Alan was 53 years old at the time—the youngest Lieutenant Governor in Canada’s history. Alan’s list of awards is long and matched only by his pride and genuine humility in accepting them. He was enormously grateful for the recognitions he received and to the institutions that bestowed them on him. It is noteworthy that in 1997, he was appointed a Member of the Order of Canada. In 1998, he was made a Fellow of the Institute of Corporate Directors. And, in 2001, he was one of the first people inducted into the Order of Nova Scotia. Alan was just 17 years old when his father died. Within six months that year, he had lost not just his father, but also three of his father’s brothers—all suddenly and far too young. Those deaths, he said, made him mindful of how important it was to do something good with the time you are given in life. Alan was involved as president, chair, or vice-chair of almost 30 organizations—all volunteer positions. He was determined to give all of the talents he had to help the causes that he believed in. In fact, he insisted we not mention any one in particular because he cared for them equally. We trust that the legacy he built by donating his fierce loyalty, intelligence and boundless enthusiasm to these organizations stands in their histories and in the shape of their futures as a testament to his character and love. Alan was a lifelong Haligonian and a proud Nova Scotian. He was among the last of the generation whose childhoods were marked by the Depression. He remembered the kindness of a city where his family’s landlord allowed them to live for free in their flat on Windsor Street throughout the Depression and then—when it ended—wouldn’t allow them to pay back the accumulated rent they owed. Where little boys flew homing pigeons from Truro to Halifax. Where extended families scraped together money to try and send children to school. Alan carried that sense of kindness and grace throughout his life and his interactions with others. He loved nothing more than to ask—with sincere interest—about you. He was a lively conversationalist with a quick wit and a ready smile. But more than that—he was a gentleman who had a deep and abiding sense of the humanity and worth of every person he encountered. In addition to his children, Alan leaves behind the six grandchildren he adored and who brought him so much joy: Rebecca Pace (Dan Pajek); Sarah Beth Pace (Sean Borden); David Pace and Emma Pace; MacKenzie Abraham and Lindsay Abraham, and the three great-granddaughters who delighted him in his final years: Ella and Poppy Pajek and Livia Borden. The family would like to acknowledge the tireless efforts and compassionate care of their father and mother over many decades by Dr. Patricia Beresford. Also, special thanks to the staff at Parkland at the Gardens. Online condolences may be made at: www.jasnowfuneralhome.com . In lieu of flowers or other tribute, the family appreciates contributions in Alan’s name to The Rose Marie (Belliveau) Abraham Scholarship at Saint Mary’s University. https://smu.ca/giving/alan-r-abraham.html . In recognition and support of the public health and safety measures related to COVID-19, the family will hold a private service. Members of the public may witness the service online at 10 AM Thursday October 8, 2020. For more details visit https://www.halifaxyarmouth.org/cathedral/. A live link will be posted closer to the date of the broadcast.
See more See Less

In Memory Of The Honourable Alan Rockwell Abraham