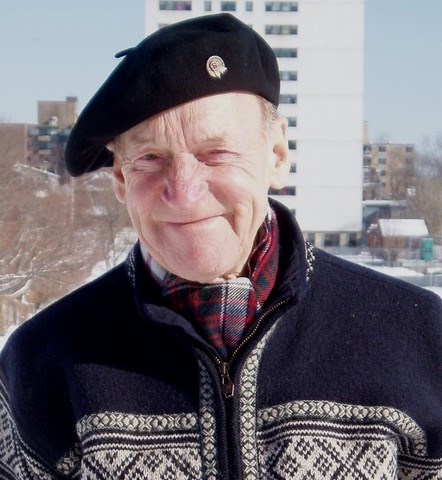 McDonald, Angus, Master Mariner, aged 93, died on March 23, 2020, at home with family. Born in Glasgow, Scotland, he loved the sea and ships. In 1943, at the age of 17, he joined his first ship, and survived being torpedoed in the South Atlantic during that first voyage. He continued his maritime career, from cadet through to navigating officer, tug skipper, harbour pilot, and finally was appointed to command of his own ship. After sailing as Master in several ships, he came ashore to various shore jobs, including marine surveyor, port warden, and marine safety consultant. In 1951 he married the love of his life, Mary Guthrie, a marriage that lasted 68 years until dear Mary’s death in September 2019. Captain McDonald made significant contributions to the maritime sector over very many years through his work with Transport Canada, Canadian Coast Guard, the Nautical Institute, CESO and the International Ocean Institute - Canada. He was a founding member and past president of the Atlantic Division of the Company of Master Mariners of Canada and a Fellow of the Nautical Institute. Angus was an avid writer and contributor of professional papers and commentary to nautical publications. He was instrumental in committees organising annual seminars on nautical matters, pollution and safety of seafarers. He had a passion for learning and teaching. In February 2020, Angus was awarded the UK Merchant Navy Medal for Meritorious Service for his contribution to the safety of seafarers and to the Maritime Industry. Angus achieved his goal of writing his book "My Lucky Life", chronicling his life at sea. Angus loved the works of Ayrshire poet Robert Burns. He was a founding member of the Halifax Burns Club and their Honorary Life President. He was well-known for his recitation of poems by Robert Burns, including a great rendition of the “Address to a Haggis”. Angus was also an active member of Fort Massey United Church, volunteering at many events including being master of ceremonies for several Phantoms of the Pipes concerts and also for the Outreach Committee. In 2018, Angus was awarded the Sovereign’s Medal for Volunteers acknowledging his volunteer efforts in various aspects of the nautical field, Rotary, church and Meals on Wheels. He established and ran the Sea Venture Society , from 1985-1991. This was a sail training venture for young people, giving them experience at sea on a tall ship, sailing out of Halifax Angus was a member of the Canadian Naval Memorial Trust which advocates to preserve HMCS Sackville just as she was in 1944. Being a seafarer, he recognized the important work of the Mission to Seafarers Halifax and remained a strong supporter of the Mission. When delivering meals for Meals on Wheels, Angus built many wonderful relationships with clients due to his cheerful, funny and caring demeanor. Angus and a group of good friends were regulars on Thursdays for lunches at The Old Triangle in Halifax; they enjoyed the camaraderie with each other and the staff. Dearly loved and will be forever missed by his son Alan, New Zealand; daughters Lindsay and Alison; daughter-in-law Catherine, New Zealand; grandson Finn and granddaughter Katy, New Zealand; as well as by nephews and nieces in Scotland and England, not to mention by a very wide circle of very good friends. A Celebration of Life will be held at Fort Massey United Church at a later date. In lieu of flowers, memorial donations may be made to the Canadian Naval Memorial Trust, Mission to Seafarers Halifax, the Nova Scotia Sea School or Fort Massey United Church. www.jasnowfuneralhome.com
See more See Less

In Memory Of Angus McDonald