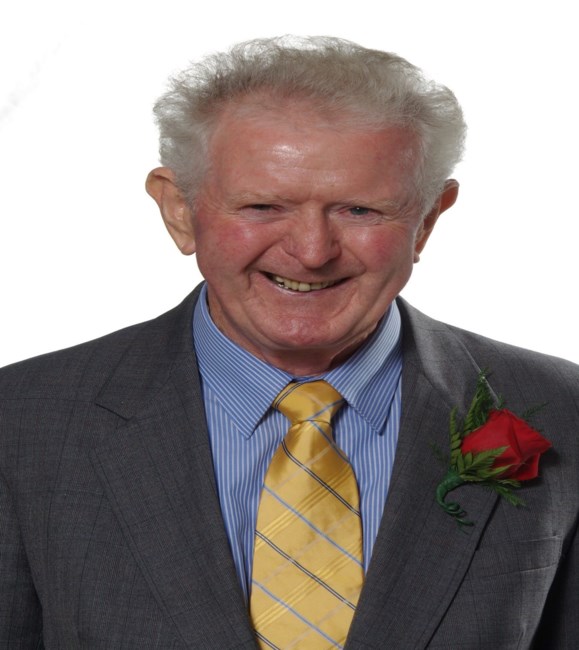 Burton MacDonald died at the Halifax Infirmary on October 20th after complications evolving from his over a year-long battle with Acute Myeloid Leukemia. He was born September 13, 1939, in Témiscamingue, Quebec, the son of Dan J. MacDonald and Christena Gillies, He is survived by Rosemarie Sampson, his wife of 42 years, his siblings: Kaye Mackenzie of Sydney, Marguerite MacDonald (George Landry) of River Bourgeois, Gary MacDonald (Bonnie Dawe) of Sarnia, Ontario and Anne MacDougall (George) of Port Hood and sisters-in-law, Trudy MacDonald of Port Hood and Sharon MacDonald of Antigonish, his in-laws, Margaret Sampson of Hingham, MA. Nicholas Sampson (Denise Coll) of South Boston, Gertrude Sampson Fowkes (Gerard) of Quincy, MA, and Kevin Sampson (Ellen) of West Roxbury, MA and many nieces and nephews. Besides his parents he was predeceased by his brothers: Stanley Gillis and Melvin MacDonald and his brother-in-law, Carl Mac Kenzie. Burton had a 62-year connection with St. Francis Xavier University from which he received a BA, Summa Cum Laude. in 1960. To help finance his studies, he worked in the iron ore, uranium, and gold mines in New Brunswick and Ontario during the summer months. He continued his studies at St. Paul’s Seminary (University of Ottawa) in September 1960 from which he received a Baccalaureate and a Licentiate in Theology, and a MA in Religious Education. He was ordained a Roman Catholic priest in 1964 and began his university teaching at Xavier College, Sydney, NS in 1965 and onto St. FX in the fall of 1966. He enrolled as a student in the Department of Near Eastern Languages and Literature at The Catholic University of America (CUA), Washington, DC in 1967. After two years of graduate studies at CUA, he augmented his doctoral studies at the Ecole Biblique et Archaeologique in Jerusalem where he was awarded an Élève Titulair in “Bible and Archaeology.” He received his Ph.D. from CUA in 1974. During his time at CUA he met his future wife. He applied for laicization in 1977 and married in 1980. Burton was a regular member of St FX faculty for over forty years. After his retirement he continued teaching part-time for another eight years. He was awarded the status of Professor Emeritus in 2017. While a student at the École Biblique, he became involved in archaeological field work in Israel, and continued field work in Cyprus, Egypt and Jordan. He spent forty years doing archaeological work in Jordan beginning in 1979. He directed five major survey projects in Jordan and published 12 books and over a hundred articles. He was known for the alacrity of his publications and his generosity in the sharing of his findings. He held fellowships at Cambridge University (UK), Massey College (University of Toronto), Dunbarton Oaks (Washington, DC) and at the American Center of Oriental Research (Amman, Jordan) He received many awards: St. F. X.’s University Research Award (2000); G. Ernest Wright Publications Award of the American Schools of Oriental Research (2005); and St. F. X.’s University Hall of Honour (2010) for his scholarship, his service and his humanity” and the citation noted that he was “a humble and unassuming individual… known for untiring devotion to his students and his academic peers”. Colleagues of Burton have acknowledged his achievements in the publication Walking through Jordan: Essays in Honour of Burton MacDonald (2017) which “acknowledges and honours the singular achievement and wider impacts of Jordan’s most prominent survey archaeologist, the redoubtable Burton MacDonald”. Burton was a man of many facets. One of his colleagues noted his “vision, kindness, generosity, organizational skills and financial and moral support”. He played as hard as he worked and walked until a month ago 5k a day; skied until a year ago and skated usually 5 days a week this past winter. An international traveler over the years, he enjoyed a trip to Morocco and another with his MacLellan cousins to Scotland this past year. And he was always ahead of the pack! Special thanks to Dr. Shivakumar and his nurse Kaitlyn and the other staff at the QEII Hematology Clinic, the Medical Day Unit and as well the Cobequid Blood collection unit. He received excellent care which never stopped all through Covid. Exceptional end of life care was afforded by the Neurology staff at the Halifax Infirmary. He would have been delighted that two of his caregivers at the end (Candace and Jordan) were X graduates. He loved teaching nursing students at X! He was optimistic but realistic throughout. Peace, Burton! Cremation has taken place. Visitation will be at J. A. Snow’s Funeral Home, Lacewood Drive, Halifax from 4-7 pm on Wednesday October 26th. Mass of Christian burial will take place at St. Ignatius Church, Bedford the following day at 12:15 pm. Internment will take place at a later date in Port Hood. Donations in Burton’s memory may be made to the QEII Foundation: Hematology Fund, St. Francis Xavier University: Burton MacDonald Bursary, or the MacDonald/Sampson Fellowship at the ACOR (American Center of Oriental Research) Amman, Jordan. To view the live streamed service and/or to place an online condolence please visit: www.jasnowfuneralhome.com
See more See Less

In Memory Of Burton MacDonald