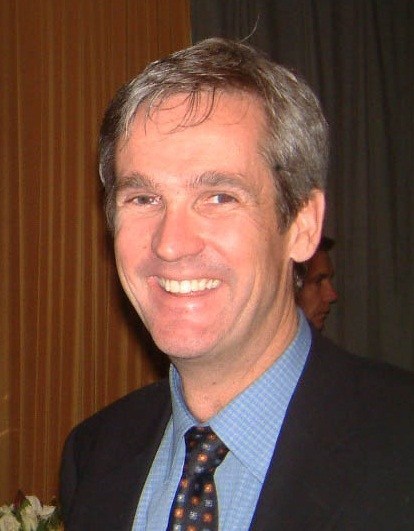 FITZGIBBONS, Paul J. Suddenly on Sunday October 28th, 2012 at the age of 54 years. Paul was the beloved son of Kathleen E. (McEvenue) Fitzgibbons, loved and respected father of Jack and Carolyn, former spouse and friend Kate Chittick Fitzgibbons and loving partner Mary Jane Burchell-Hepworth. He will be sadly missed by his siblings and their children Kevin (Brendan, Keegan), Kathleen (Crawford) (Ryan, Andrew, Megan), Theresa and Sean (Matthew, Victoria), and their spouses and partners, Marisela Mosco, Harriet Gorham, Sandy Crawford, John Petcoff and, Kate (Staples). Paul was predeceased by his father Kevin J. Fitzgibbons. His many friends from Beaverton, Toronto and Halifax will miss him dearly. Paul lived life to the fullest. He particularly enjoyed spending time with his family snowboarding, bicycling, swimming, travelling and spending time with his pets, most notably Riley, who was his constant companion on walks in downtown Halifax. He loved spending time at Cedarhurst Beach on Lake Simcoe where he spend much of his summers as a youth and at his in-law’s cottage on Stoney Lake. A successful entrepreneur and chef, Paul’s passion was sports and photography. He travelled extensively exploring mountains, beaches and nature in Europe, Western Canada and the United States and the Caribbean. The funeral service will be held at the J.A. Snow Funeral Home, 339 Lacewood Drive, Halifax (902) -455-0531 in the chapel Friday, November 2nd at 4:30 P.M. A memorial service will be held in Ontario at a later date. In remembrance and in lieu of flowers, memorial donations may be made to the QEII Health Sciences Centre Foundation. To send your condolences or for further information visit www.jasnowfuneralhome.com
See more See Less

In Memory Of Paul Joseph Fitzgibbons