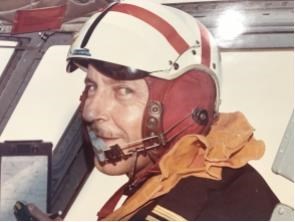 Armstrong, Robert George (Bob), Lieutenant-Colonel (RCAF pilot (ret’d)) OMM, CD – passed peacefully surrounded by family at the Parkland Retirement Residence, Halifax NS on Wednesday, January 27, 2021, at the age of 85. A proud native of Ireland, Bob spent his early years in Dublin, and in 1948, ventured to Belfast to attend boarding school at Campbell College where he graduated in 1953. During this time, he developed a penchant for flying - as Bob joked, he served one year of ‘penance’ in the army cadets before joining the Royal Air Force (RAF) Cadets; and, in 1953 was awarded a flying scholarship on a RAF cadet exchange to Canada. He was most impressed serving alongside members of the Royal Canadian Air Force (RCAF); hence, after studying for a science degree at Trinity College in Dublin and obtaining his private pilot’s license, he set his sights on emigrating to Canada and joining the RCAF to pursue his dream of flight. ‘Once you have tasted flight, you will forever walk the earth with your eyes turned skyward, for there you have been, and there you will always long to return.’ - Leonardo da Vinci In October of 1954, Bob arrived in Canada, was accepted in the RCAF and started his career with basic training at Centralia ON. His flight training began at Penhold AB flying the Tiger Moth and Harvard aircrafts and then to Portage la Prairie MB (T-33 aircraft) for advanced pilot training and was awarded his pilot’s wings in 1955. After instructor training, he returned to Penhold as a flight instructor for NATO pilots from participating countries. During this time, Bob met and married Mary Joan Hensman (the base dietician) and the rest is history. From 1958 to 1960, and again from 1963 to 1967, Bob was stationed at Trenton ON flying the Dakota, Canso, Otter and Expedition aircrafts on Search and Rescue (SAR) missions, after which he was posted to 412 Squadron at CFB Uplands in Ottawa flying the Cosmopolitan and Dakota aircrafts on VIP transfer. This was an interesting job which involved ferrying numerous national and international VIPs around the globe. The next assignment came in 1968 when Bob was assigned to the UN peacekeeping unit in Palestine serving one year on the Golan Heights where occasional ‘misfires’ kept everyone awake and often taking cover. Following a short posting to the RCAF Staff College in Toronto, Bob spent the next five years, from 1970 to 1975, at CFB Greenwood NS with 405 Squadron, flying the Argus on patrol and SAR missions over the Atlantic Ocean. After promotion to Lieutenant-Colonel, Bob commanded the 880 Tracker Squadron SAR operations based at CFB Shearwater. Finally, after a spell as Base Operations Officer, he was posted to the National Defence Headquarters in Ottawa in 1981, during which time he participated extensively in NATO strategy and operations, travelling regularly to NATO Headquarters in Brussels, Belgium for meetings and conferences. He retired from the RCAF in 1990 after serving his country proudly at home and abroad for 35 years. For Bob, retirement did not mean idleness - he enjoyed a long, active and healthy retirement enjoying family, friends and hobbies that included photography, reading, writing, gardening and travel while also pursuing his varied interests through participation in the political realm and community-focused organizations. Predeceased by his loving wife of over 61 years, Mary Joan, Bob is the much-loved son of the late George and Dorothy (Wolfe) Armstrong and dear brother of the late Heather Allin; beloved father of William, Barbara, Heather (John Pickford), Peter and Elizabeth; proud grandfather and great-grandfather, and cherished uncle and cousin to his extended family in Canada, Ireland and the UK. Ever ‘a gentleman and a scholar’, Bob will be remembered for his love of the skies, public service, quick wit, good sense of humour and love of a good laugh. Treasured memories are forever etched in the hearts of all who knew him. ‘They change their sky, not their soul, who run across the sea ….’ - Horace The family would like to extend their appreciation to all at the Shannex Parkland Retirement Residence for the gentle care Bob received during his time there. A funeral will take place in Picton ON (schedule to be determined) where Bob will be interred at the Mount Olivet Cemetery alongside his wife, Mary Joan. If desired, donations can be made in his honour to the Alzheimer Society of Canada www.alzheimer.ca or the Shearwater Aviation Museum Foundation www.samfoundation.ca. To send an online message of condolence, please visit www.jasnowfuneralhome.com
See more See Less

In Memory Of Robert George Armstrong