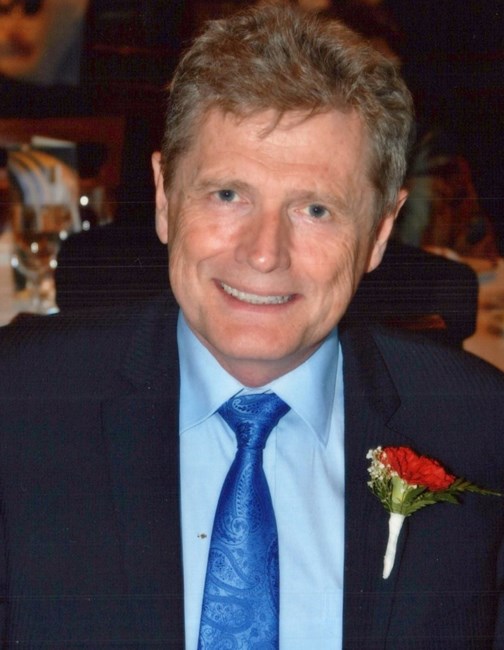 It is with great sorrow that we announce the passing on August 28, 2021 of Scott James Murray, aged 66, of Halifax, NS. He was the youngest child of the late George Murray and Nonie (Wallace) Murray of Pictou, NS. He is survived by his loving wife of 36 years, Patricia, and their children, Alison (Miles) Rhynas of Victoria, BC, John of Halifax, NS, Susan of Vancouver, BC/Halifax, NS, and Margot of Halifax, NS. Also surviving are his siblings Margot (Ron) Walberg of Thunder Bay, ON, Dr. T.J. (Jock) (Janet) Murray of Halifax, NS, Janet Henley of Toronto, ON, Maida of Halifax, NS, Wendy of Halifax, NS, Ian of Toronto, ON, and sister-in-law Shirley Murray of Pictou, NS. He leaves behind many nieces and nephews, all of whom he held so dear and of whom he was immensely proud. Besides his parents, he was predeceased by brothers Wallace and his wife Marie of Vancouver, BC, Bruce of Pictou, NS, Ross and his wife Pat of Halifax, NS, brothers-in-law, John Henley of Toronto, ON, and Dr. Alexander (Sandy) Murray of Halifax, NS. He was also predeceased by his beloved niece Suellen Murray, of Halifax, NS. From his wife’s family he sadly leaves his father-in-law John Coulter of Tatamagouche/Halifax, NS, his sisters and brothers-in law Linda and David Turner of Guelph, ON, Susan Coulter of Halifax,NS, and Michael Coulter of Cochrane AB. Also mourning his loss are his nieces and nephews-in-law for whom he held a very special place in his heart. He was predeceased by his mother-in-law Marjorie Coulter of Tatamagouche/Halifax, NS, and brother-in-law Colin Millward of Tantallon, NS. After graduating in 1980 from Dalhousie Medical School, Scott went on to practice family medicine in Elora, ON, a time for which he held great fondness. He then returned to Dalhousie to pursue the specialty of Dermatology and completed his studies in 1987 from the University of Ottawa. He practiced Dermatology in Halifax for 34 years and was an Associate Professor of Medicine, Division of Clinical Dermatology and Cutaneous Science at Dalhousie University, throughout which he spent many fulfilling years imparting his knowledge and experience. He was an accomplished and astute physician but was best known for his caring approach, his genuine interest in the lives of his patients, his quick wit, and ability to find the humour and joy in all situations. He never lost his love of learning and held a sharp curiosity for all nature of things in heaven and on earth. Scott was also known for his musical skills, in particular his ability as a pianist. His natural ear and eclectic taste in music led him from classical studies, to rock & roll as a member of the doctor group MD5 with whom he took great pleasure in performing for several decades. Unprompted and in great testament to his skill, he often delighted his children with farcical renditions of well-known songs, adding to the incessant rollicks of the household, with him leading the way. 1987 marked the year of the birth of Scott’s first child, with three more to follow in 1989, 1991, and 1993. Becoming a father to his four children was his greatest joy and his most precious achievement. His eternal love for his wife, Patricia, was clear to all. Always loving, wise and kind, he gave himself unconditionally to his family who adored him in return. He will be forever missed. Arrangements and cremation have been entrusted to J. A. Snow Funeral Home, 339 Lacewood Drive, Halifax, NS. Visitation will be held October 9 at from 2:00-3:00 pm with a Celebration of Life to immediately follow. Private interment will occur October 10 at Sea View Cemetery in Braeshore, Pictou Co., at 2:00 pm. Messages of condolences may be sent to the family by visiting: www.jasnowfuneralhome.com
See more See Less

In Memory Of Scott James Murray