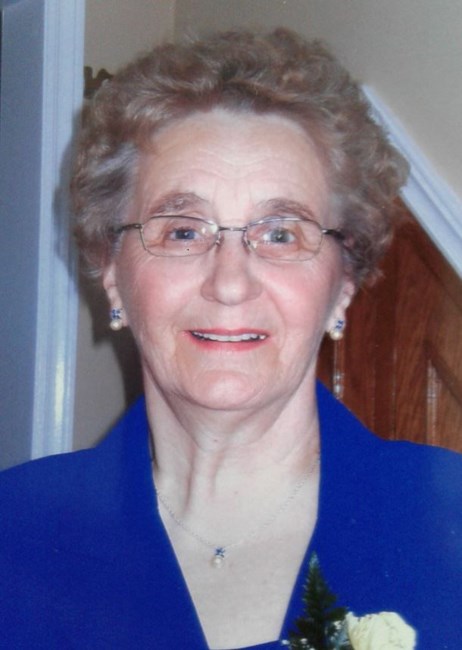 Theresa Marie Brine, aged 83, passed away on July 27, 2022 at Northwood - Ivany Place, Bedford, NS. Born in Halifax, she was a daughter of the late Harold and Annie (Fewer) Kline. Theresa was also raised by her grandmother Catherine Fewer whom she often spoke of fondly. She was the beloved wife of the late Gordon (Gordie) Brine for 63 years. When Theresa was a teenager, she worked at Moirs until she met Gordie. She married him at the age of 18 as he began his military career. For the next 28 years, she supported her husband's career and raised their six children as they moved to many different locations in Ontario, Europe and Quebec. Their final posting would be back home to Nova Scotia in 1970 to settle their family. Theresa was an avid walker and enjoyed bowling. She loved music (especially ABBA) and loved to dance. She treasured shopping trips to the states with her daughters and made the best lemon meringue pies ever, always a family favourite! Theresa is survived by her daughters, Gwen MacPherson, Charlett Brine, and Kathy (Jerry) Marriott; sons, Keith (Diane), Derrick (Anna), and Steven; sister, Lorraine McCarthy (Ernie); twelve grandchildren, and six great-grandchildren. She was predeceased by her husband, Gordon, brothers, Buddy, Billy, Laurie, a brother in infancy, sisters Mary, Shirley, and Gloria, and a grandson in infancy, Matthew. The family would like to thank the compassionate and caring staff at Ivany Place for taking great care of our Mom over the past three months. Arrangements have been entrusted to J. A. Snow Funeral Home Ltd. No visitation/service by request. Cremation has taken place. Interment to follow at Gate of Heaven Cemetery in Lower Sackville at a later date. In lieu of flowers, donations to the Northwood Foundation or Alzheimer's Society would be appreciated. Mom you will be dearly missed, but we take comfort knowing that you are reunited with Dad. You will always be our Dancing Queen!
See more See Less

In Memory Of Theresa Marie Brine