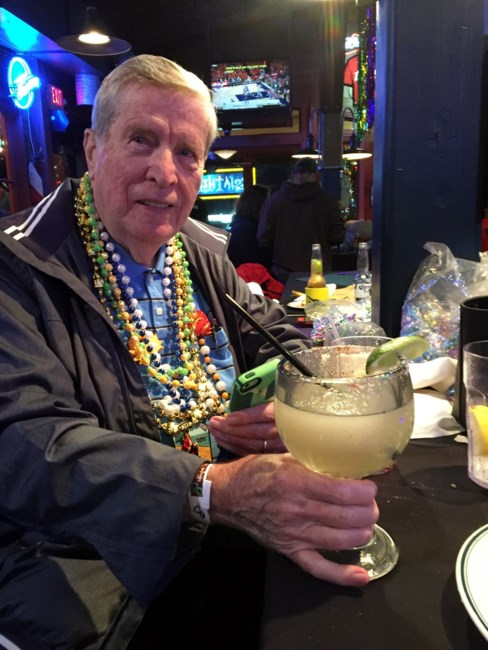 Andrew John Herpel, best known as Andy, Pop-Pop and GG-Pop, reunited with his beloved wife Patricia in heaven January 20th. Andy was born in Maryland on October 9th, 1930 to William and Mary Herpel. In 1948, Andy joined the National Guard drum corps as a bugler and served proudly for 10 years. His stories about turning the base drum into a card table for poker nights, and sneaking off from camp to write letters and naps were entertaining. Andy was the first in his family to complete high school in 1949, all while working and fulfilling his duties with the National Guard. Andy met Patricia (Pat) on May 8th, 1952. Pat answered the phone when he called his friend Ernestine to wish her a happy birthday and the rest is history. They went bowling, something they both loved to do, and married on May 9th, 1953. After transitioning out of the National Guard, Andy began working for Esso, now known as Exxon, in 1952 starting out in the mailroom. Andy worked his way up from the mailroom to IT department, and that led to Exxon transferring Andy and his family to Houston in 1975, and that became their home. After 33 years at Exxon, Andy retired for the first time in 1986. Funny enough, the same year Andy retired, he was called back to do contract work because in true Andy fashion, his work ethic and brilliant mind made him invaluable. He officially re-retired in 1992. During retirement, he and his wife Patricia spent time traveling and doing a little gambling. They both loved Vegas and Coushatta, and made several road trips to Louisiana over the years. Andy and Pat joined the Exxon Annuitant Club during retirement and the group would meet monthly to coordinate trips together throughout the years. Andy loved collecting stamps, tropical fish, and coins. His stamp and coin collections will live on within his family. All of his grands and great grands never went empty handed as Andy always had gold coins in his pocket to give out for any and all special occasions. As he graduated to GG (Great Grand) Pop status he created other traditions and collections for each of his great grands. The collection of Hallmark Christmas books will be a forever cherished memory. Andy had a deep love for his family. His children, Robert and Arlene, were the light of his life. That light grew when his four grandchildren came along. Andy attended all events he could for his grandchildren. He was proud of them and their accomplishments. Even when he was not present at events videos and pictures had to be shared so that he could be part of the moment. He was so invested in all of us and was truly proud of all our accomplishments. It would be remiss to say that his proudest accomplishment was watching all four of his grandchildren become parents to his eight great-grandchildren. Andy loved deeply and always put his family first. He also never came empty handed, especially for his grands and great grands. Be it sweet treats, gold coins, or a “shh, don’t tell you mother” money he would sneak in our pockets, he always had a way of making everyone feel special. He also had a knack for writing poetry, quick wit and had an amazing way with words. Andy was a devout Catholic, and a member of St. Catherine of Siena church where he attended mass each week. In true Catholic fashion, he sat in the same pew each week and established friendships with everyone in the pew around him. Andy is preceded in death by his parents William and Mary, his sisters Ruth, Annette, and Carolyn, and his beloved wife Patricia. He is survived by his son Robert and wife Gloria, daughter Arlene and husband Scott, his grandchildren Melissa, Andrew and wife Randle, Sarah, Matthew and wife Gabrielle, and his great-grandchildren Sydney, Connor, Abigail, Emily, Emrys, William, Andrew, and Hadley. Fond memories and expressions of sympathy may be shared at www.earthmanresthavenfuneralhome.com for the Herpel family.
See more See Less

In Memory Of Andrew John Herpel