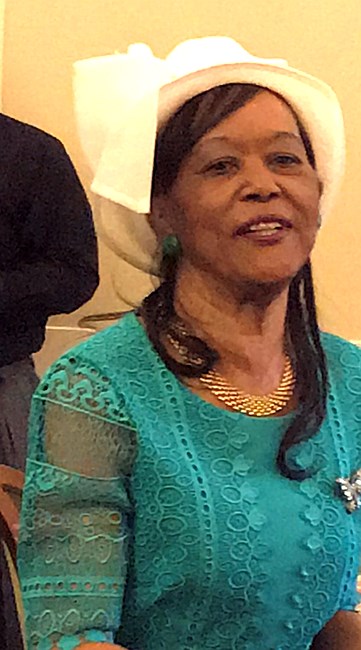 Mr. & Mrs. Collin Boykin, Wilcox County, Flatwood, Alabama and to this union two daughters were born, Emma Francis and Doris. Doris began her relationship with Christ at the early age of five. She realized that God was the only one who could help in her struggle with an incurable illness. She united with Balling Spring Baptist Church and was baptized at the age of twelve under the leadership of Reverend W. A. Smith. She attended high school in Alabama and graduated from Amelia Love Johnson Morengo County Training School, Thomaston, Alabama. After her graduation she moved to New Orleans, Louisiana where she met and married Russell Gills. She was the mother of four children, two daughters, and two sons. After the birth of her children, she and her family moved to Houston, Texas. She continued her education by attending a trade school and receiving a certification as a medical assistant as well as a brief career as a chef. She loved cooking and believed that cooking brought people together. She prided herself on making sure Thanksgiving and Christmas was where family gathered together to eat and enjoy each other. She became active in her community and school activities involving her children. She received many awards and certificates for her work. She united with St. Stephen Baptist Church in 1967 under the leadership of Rev. M. D. Smith. She was a member of the Order of the Eastern Star, Ruth Chapter 222 for many years where she served as a chaplain and treasurer until she left her assignment. She loved her family dearly and they traveled as a family extensively to several places within the U.S. and visited family and friends. She was preceded in death by her parents (Collin and Aurelia), her grandparents (Abrom and Emma Steele), a sister (Emma Francis Robinson), a son (Thomas Gills), a daughter (Aretha Gills Arceneaux), a brother-in-law (Herbert Riley). She leaves to mourn a loving and devoted husband, Russell Gills, Sr., one daughter, Yolonda Gills Gaines, one son, Russell Gills, Jr. (Joy of San Antonio, TX.). Nine grandchildren, Kimberly Lewis (Barret of Oviedo, FL.), Ashley Doyle (Devin of Crosby, TX.), LaToya Melton, Miyl Gills, Devin Gills, Jayden Gills, Taylor Guidry, Taylore E. Gills, and Christopher Gaines. Two great-grandchildren Kennedi and Berkley Lewis. One sister-in-law Delores Taylor (Erskin of New Orleans), one brother-in-law Alvin Riley, five nieces, one nephew, and host of family and friends.
See more See Less