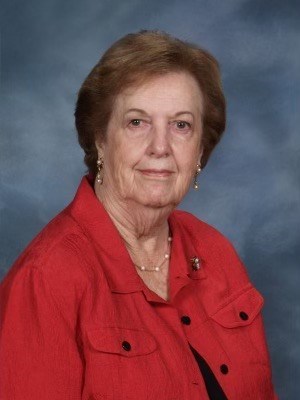 Edith Rials Focht, of Houston, Texas, passed away on February 2, 2022 at age 93. Edith was born on December 9, 1928 to Joseph L. Rials and Susie M. DeLaughter in Lincoln County, MS. After graduating from high school she went on to study education at Co-Lin College in Wesson, MS. After graduation, Edith began teaching in Vicksburg, MS. In 1949, she met John A. Focht, Jr. at a square dance in Vicksburg, and they wed in 1950 when John was called to serve in the Korean War. After John was honorably discharged from the Army in 1953, John and Edith moved to Houston, Texas where they were active members of Grace United Methodist Church and later Fairhaven United Methodist Church. Edith and John adopted two children, John III and Judith (Judy) from the Methodist Mission Home in San Antonio. Edith was a full-time Leave it to Beaver mom. She spent her time supporting her husband and her children, but always made time for volunteering at the church, school and local hospital. She faithfully served on the PTA at multiple schools and served as secretary and treasurer for the Houston-area TSPE Women’s Auxiliary for many years. Edith and John were also avid gardeners and traveled extensively. When grandchildren arrived, Edith was a passionate and loving grandmommy. From cousin camps to mystery trips, Edith and John created monumental memories for their grands. Edith was predeceased by her parents, her husband, and her five siblings: Hancy Lee Rials, Joseph Lee Rials, Jr., Thomas Earl Rials, Mary Margaret Rials Pritchard, and Johnnie Mae Rials Case. She is survived by John III and Cheryl Focht, Judy and Scott Rimato, Morgan and Justin Keith and their son Austin, Sarah Focht, Thomas and Ashley Focht, many nieces and nephews, and her favorite family member - granddog, Daisy. The family wishes to thank the Texas Home Care Partners of Houston caregivers for supporting her the last three years. The family is ever grateful for the amazing angels at Village Green Alzheimer’s Home Care of Conroe who thoughtfully cared for and loved Edith for the last eight months. In lieu of flowers the family requests donations to the American Cancer Society and the Susan G. Komen Foundation. Visitation will be at the Waltrip Funeral Home, 1415 Campbell Rd., Houston, Tx 77055 on Thursday, February 10, 2022 from 1 - 2 pm, followed immediately by the memorial service in the chapel. Graveside service will follow at Memorial Oaks Cemetery, 13001 Katy Fwy, Houston, Tx 77079.
See more See Less

In Memory Of Edith Rials Focht