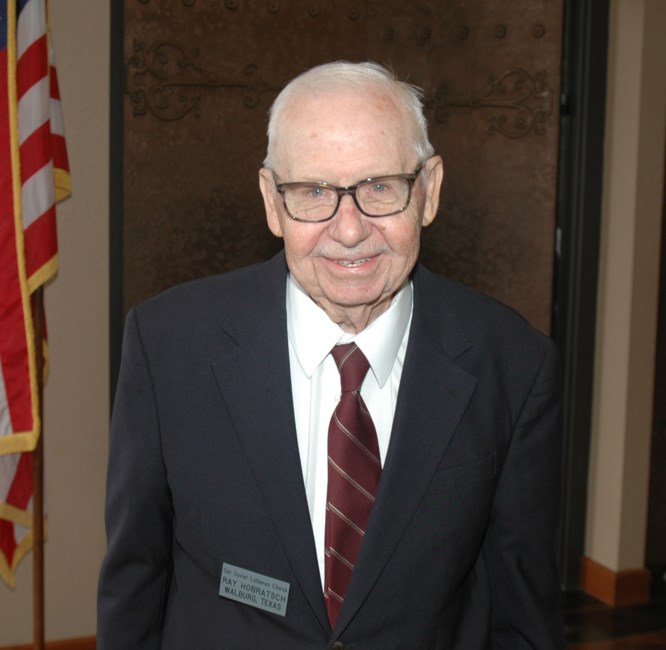 Raymond Gilbert Hobratsch went home to our Lord and Savior on January 23, 2022, at 90 years old. He was born on September 3, 1931, in Walburg, Texas, to Herman and Emilie (Kalmbach) Hobratsch, was baptized on September 27, 1931, at Zion Lutheran Church, where he also went to school and was confirmed on March 18, 1945. His family lived on a farm, near a creek which had a great swimming hole, where he had fun with his friends. During the depression, they would take in the occasional drifter to do odd jobs for room and board. Ray would also help take care of his disabled Uncle John. After he graduated from Georgetown High School, Ray joined the U.S. Air Force, where he was stationed in Germany as a radio technician. Ray married Viola Domel on July 21, 1957, at Zion Lutheran Church. They moved to Houston, Texas, and were blessed with four daughters, Geraine, Sheila, Sandra, and Barbara, who were all faithfully raised in the love of Christ through Our Savior Lutheran Church and School. After the Air Force, Ray went to technical school in Chicago with friends. One of his first jobs was as a repairman who got to drive around in a TV Ambulance, which was a converted hearse. He retired from GeoSource after 35 years working as an assembly line supervisor. When his daughters were young, he worked part-time in the Astrodome taking tickets so he could see the Astros play. He’s been a fan ever since. When he retired, Ray and Viola moved to Hutto, Texas on land close to her aging parents. He learned to keep goats and cows, and they played lots of dominoes with her brother Marvin and wife Elsie, who also lived close by. Ray enjoyed having his grandchildren visit so he could teach them how to fish in the tank, play dominoes, and maybe get them to do a little work around the place. Most recently, he loved to tell the story of how he got a crooked finger at the age of 2, by accidentally shooting it with a rifle leaning on the fence that was used to shoot pesky birds. He didn’t remember the pain, but remembered lots of blood. After getting it all wrapped up he ran to his brother Harry and exclaimed, “Mein Finger geshossen! Mein Finger geshossen!” (Shot my finger!) In 2018, Ray and Viola moved back to Houston to be with their daughters and their families, where they became involved as renewed members of Our Savior Lutheran Church. He enjoyed his lunchtime Whataburger (cut the pickles), and never said no to an invitation to King’s Bierhaus. Ray was preceded in death by his parents Herman and Emilie, all his siblings: Irene Brayne, Harry Hobratsch, Myrtle Hartman, and LaVerne Domel, and his beloved wife of nearly 61 years, Viola. He is survived by his children Geraine (Manuel) Zamora, Sheila (Charles) Kerns, Sandra (Ricky) Leger, and Barbara (Dean) Mushinski; grandchildren: Lauren (John) Shade, Karin, Matthew (Nicole), and Hannah Zamora, Kirstie (Sai Yan) Cheng, Taylor (Lydia), Elyssa and Meghan Mushinski; great-grandchildren Elizabeth and John Shade IV, Thea Mushinski, and Archer Cheng; and numerous nieces and nephews. Visitation will be on Friday, January 28, 5:00-7:00 PM, at Heights Funeral Home, 1317 Heights Blvd, Houston, TX 77008. The funeral service will be on Saturday, January 29, at 10:00 AM, at Our Savior Lutheran Church, 5000 W. Tidwell, Houston, TX 77091. Interment will follow at Woodlawn Garden of Memories Cemetery, 1101 Antoine Dr, Houston, TX 77055. Afterwards, a reception will be held in the Bible Class Room at Our Savior Lutheran Church. In lieu of flowers memorials can be made to: Our Savior Lutheran Church, 5000 W. Tidwell, Houston, TX 77091 Fond memories and expressions of sympathy may be shared at www.heightsfuneralhome.com for the Hobratsch family.
See more See Less

In Memory Of Raymond G. Hobratsch