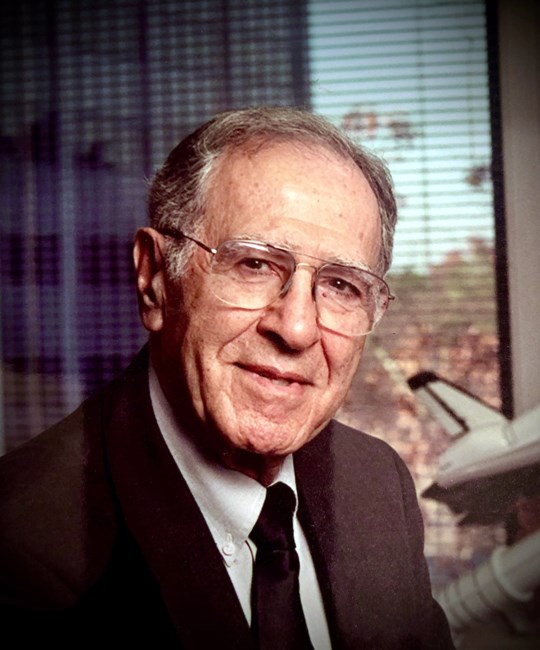 Alexander ‘Mac’ A. McCool Jr., 96, of Huntsville, Alabama went to be with his Lord and Savior on July 14, 2020. He was born in Daytona Beach, FL to Najla and Alexander A. McCool Sr. Mr. McCool graduated from Mainland High School in 1942 and became a first class petty officer and machinist mate in the U. S. Navy serving at various Naval Air stations. He received a bachelor’s degree in Mechanical Engineering at the University of Louisiana at Lafayette and a master’s degree in Engineering at Louisiana State University in 1951. After college, he was employed by the Army Corps of Engineers in Vicksburg MS, where he met his wife of 66 years. He transferred to the Ordinance Corps, U.S. Army in 1954 in Huntsville, where he worked in the Guided Missile Development Division at Redstone Arsenal as a propulsion engineer. He developed propulsion systems for early U.S. Space launch vehicles. As chief of Engine Systems Analysis with the Army’s Ballistic Mission Agency, he was a key participant in the propulsion design of the Jupiter rocket, which placed the “Free World’s” first satellite, EXPLORER into orbit. In 1960 when Marshall Space Flight Center was established, Mr. McCool transferred to NASA to work with the Wernher von Braun team. He was heavily involved in the design of the propulsion systems for the SATURN launch vehicles. In 1969, as Chief of the Systems Project in the Office in the Marshall Space Flight Center’s Astronautics Laboratory, he directed project engineering for the SATURN/APOLLO and SKYLAB programs. In the 1970s, as the Director of Structures and Propulsion Laboratory, McCool assumed the leadership role in the early Development of the Space Shuttle’s Main Engine and in the early ‘80s, managed the in-house development, test and flight phases of the Space Shuttle Solid Rocket Boosters. After the Challenger accident in January 1986 Mr. McCool was selected to lead the Solid Rocket Boosters recovery activity at the Kennedy Space Center. His expertise made him a valuable commodity at NASA, being named Director of the Safety, Reliability, Maintainability, and Quality Assurance Office at the George C. Marshall Space Flight Center. Mr. McCool retired in 2004 after over 50 years of service. Since his retirement he became a emeritus docent at the U.S. Space and Rocket Center where he continued to share his love of space. Mr. McCool was an active member of Whitesburg Baptist Church and a Bible teacher for over 50 years. Mac had many interests including running which he started at the age of 50. Antiquing was one of his favorite pastimes. He also loved to travel the world with Tuggie, but his favorite place to vacation was always the beach. His parents, his brother Jim, and his beloved wife, Genelle ‘Tuggie’ Wade McCool, predecease him. Survivors include his children, Alex McCool III (Jennifer), and Janet Cooper (Jack), grandchildren Alex McCool IV (Chelsea), Nathan Cooper (Ashleigh), Daniel Cooper (Kaylynn) and Nicholas McCool, and five great-grandchildren. Visitation will be at 10:00 a.m. at Whitesburg Baptist Church, South Campus, with the service to follow at 11:00 a.m. on Saturday, July 18, 2020. The family will hold a private graveside service at Valhalla Memory Gardens. The family would like to thank Dr. Kirk Holdsambeck for his outstanding care of the McCool family. In addition, the family would like to thank Hospice Family Care. Memorials may be given to Hospice Family Care, 10000 Serenity Lane, Huntsville, AL, 35803.
See more See Less

In Memory Of Alexander "Mac" A. McCool Jr.