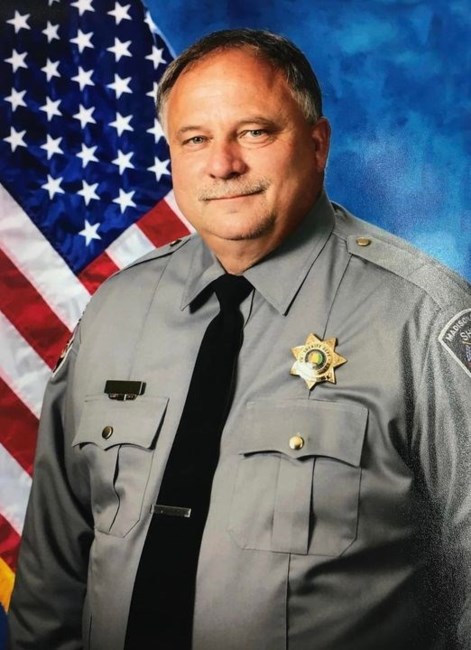 Steven Ray Finley, age 59, of Huntsville, Alabama. Born December 20, 1962 in Huntsville, AL and died Jan. 14, 2022 in Huntsville, AL. Steven attended Lee High School, and furthered his education in the United States Army where he served for 10 years on active duty. Steven began his years of service with the Madison County Sheriff's Office in 1992 as a Correctional Officer. A few years later he transferred to the Enforcement Division as a Deputy Sheriff to begin his duties as a peace officer. In 2008, Steven was assigned to the Criminal Investigation Division of the Sheriff's Office where he served the citizens of Madison County with honor and dignity. He was a long standing member of the Fraternal Order of the Eagles and the Fraternal Order of Police. He loved being outdoors whether it was hunting, fishing, building on some new project, or just being in his garage working on something that may not even be broken. He is survived by his wife of 15 years, Judy Finley of Huntsville, Alabama. one son: Erik Finley (Brenda) of Lawrenceburg, TN. five daughters: Jennifer Finley of Huntsville, AL, Traci Houser (Nathan) of Winchester, TN, Tiffany Higinbotham of Huntsville, AL, Alyssa Puff of Huntsville, AL, and Victoria Perkins (Chase) of Green Cove Springs, FL. 16 very cherished grandchildren: Christopher, Zachary, James Tiler, Haley, Kayleigh, Arionna, David, Shaun Ryan, Mia, Zana, Brantley, Camdyn, Mason, Max, Mira, and Raelynn. one adored and beloved great grandson: Taeson. two brothers: Robert Finley of Lacey Springs, AL, and Richard Finley of Huntsville, AL. one sister: Teri Robinson (Cleveland) of Huntsville, AL. Steven was preceded in death by his father, Jerry Finley of Huntsville, AL, his mother, Mary Rose Norman Parker of Huntsville, AL, and a grandson, Erik Finley Jr. of Kelso, TN. Above all else, Steve was a family man who created a legacy which will not be forgotten. To the people who were closest to him, he loved you with all his being! Rest in Paradise Big Daddy! Fond memories and expressions of sympathy may be shared at www.valhallafunerals.com for the Finley family.
See more See Less

In Memory Of Steven Ray Finley

The Celebration of Life Service