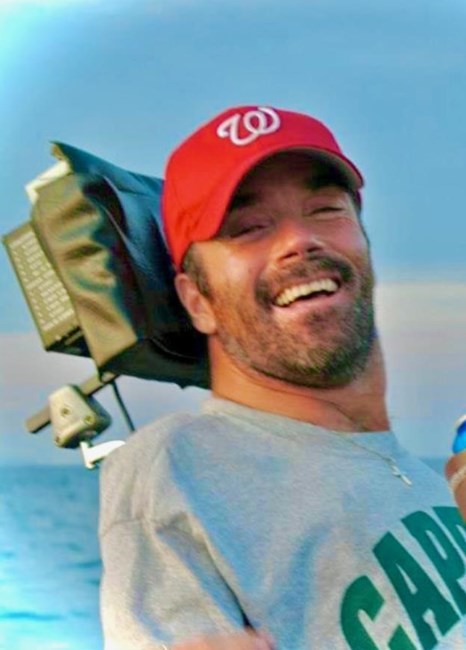 MacQuarrie, Callum Ian "Cal" - (April 14, 1973-March 31, 2021) - A friend, athlete, leader, confidante and quadfather. Cal bounced into this world on April 14, 1973, to parents Eileen and Cecil. He was an energetic, risk-taking young boy who accepted all challenges and searched for more. Cal played all sports and excelled in many. He loved the outdoors with hunting, fishing and swimming taking up much of his younger days. Cal completed his high school education in Inverness and then trained as an electrician at NSCC Halifax with a certification in scuba diving to combine both. In 1993, Cal moved to western Canada to join up with family and friends, however the lure of family and the ocean breeze brought him back to Inverness in the summer of 1995. On July 10, 1995, Cal suffered a C4-5 spinal cord injury diving off the Inverness Beach break water, his childhood playground. In the months ahead, Cal displayed courage and determination while learning to live in a disabled world much different from the able-bodied world to which he was accustomed. He embraced his new life living with quadriplegia. Cal fulfilled his lifelong dream of skydiving in 2000. He became a member of Sail Able Nova Scotia and enjoyed sailing the Halifax-Dartmouth waters with sip and puff technology. Duct tape was commonly used for his adventures that included him being taped to friends while 4-wheeling, ski-dooing, sea-dooing, kayaking, and motor-cycling in Inverness County. Following rehabilitation, Cal returned to Inverness for several years. However, due to his accessibility needs, he decided to move to the city of Dartmouth. Cal lived there for 12 years and became involved in community politics, gaining respect for his advocacy pertaining to accessibility and inclusiveness. He was awarded the Canadian Paraplegic Association (CPA) 65 Star Award, Peer Volunteer Recognition Award and recognition for his volunteer work in the Halifax Regional Municipality. In 2011, Cal returned to Inverness with his goal of making Inverness County more accessible and inclusive. He joined the Inverness Development Association which led to the formation of the Inverness County Accessible Committee. In 2018, Cal was instrumental in helping to create the accessible Inverness Beach, crowned the first fully accessible beach in all of the Atlantic Provinces. He received three awards: the Nova Scotia Human Rights Award, the Canadian Association of Occupational Therapists Citation Award, and the National Rick Hansen Make a Difference Award. Later, Cal was recognized for his achievements by the Honorable Arthur J. LeBlanc Speech from the Throne (2018) described him as a driving force for change in Nova Scotia. Cal shared his life’s experiences/lessons learned to help others who suffered spinal cord injures and/or other debilitating conditions such as ALS, depression or addictions. He was a mentor to many and a friend to all!!! Cal leaves to mourn his immediate family: loving Mom, Eileen Beaton; dedicated father Cecil MacQuarrie; best friend and sister, Cindy MacQuarrie; committed Step-Mom, Mary Anderson; loyal step-brother, Jonathan Anderson (Amy); loving nephew, Brock Morrison; special friend and brother -in-law, Ken Muise and his children, Matthieu and Chantal. Cal is also survived by a large extended Beaton and MacQuarrie clan along with numerous lifelong friends and many private caregivers whom Cal be-friended. He had a special place in the hearts of his uncles and aunts, namely: Ronsie (deceased) and Carol, Gerard (Joanne), Stephen (deceased) and Peggy, Jerome (Andrea), Bruce (Vina), Gary (Susanne), Brother Lawrence (deceased), Angus (Mabel), Stanley (deceased), Floanna (Al), Danenna (Malcolm, deceased), Lauchie (Millie), Alex (Willena), Cameron (Clare), Abby (Ned, deceased). Cal treasured the friendship that he shared with all of his Beaton and MacQuarrrie cousins. He was also predeceased by maternal grandparents, John Ronnie and Millie Beaton and paternal grandparents, Malcolm and Janet MacQuarrie. Cal’s legacy will live on…he helped many understand that people are not defined by their circumstances but, instead, by how they conquer them. Cal’s mission was to ensure that everyone is given equal opportunity to live his/her life to the fullest, just as he did…..Carpe Diem! The family expresses sincere appreciation to all health team members from Halifax and Inverness County especially, the continuing care assistants who worked privately, or through home care. Special thanks to Dr. Bennett, Dr. Ritter and the Palliative Care Nurses, Lori Ann MacDonald and Paulette Levin. Visitation Wednesday, April 7th, from 3-7 p.m. in Inverness Funeral Home. Funeral Thursday, April 8th at 11 a.m. in Stella Maris Church in Inverness with Father Dan MacDonald officiating. Arrangements have been entrusted to the Inverness Funeral Home where online condolences and tributes may be made by visiting www.invernessfuneralhome.com. Burial in the parish cemetery at a later date. Due to Covid restrictions, infection control precautions, wearing of facemasks and six feet social distancing is required. Seating restrictions will be in place for the funeral mass (100 people). Stella Maris Parish is reserved for family, friends and caregivers. Additional seating is available at the Royal Canadian Legion Branch 132 (60 people) where the service will be live-streamed. Also, the funeral will be live-streamed at Stella Maris Parish Facebook page. Donations: We will be hosting a crowd-funding campaign via Facebook for the Inverness County Accessibility Committee. It will be launched on Cal’s 48th birthday, April 14, 2021. The purpose of the campaign is to ensure that the Inverness County Accessibility Playground will come to fruition – an all-inclusive playground for children with various levels of ability.
See more See Less