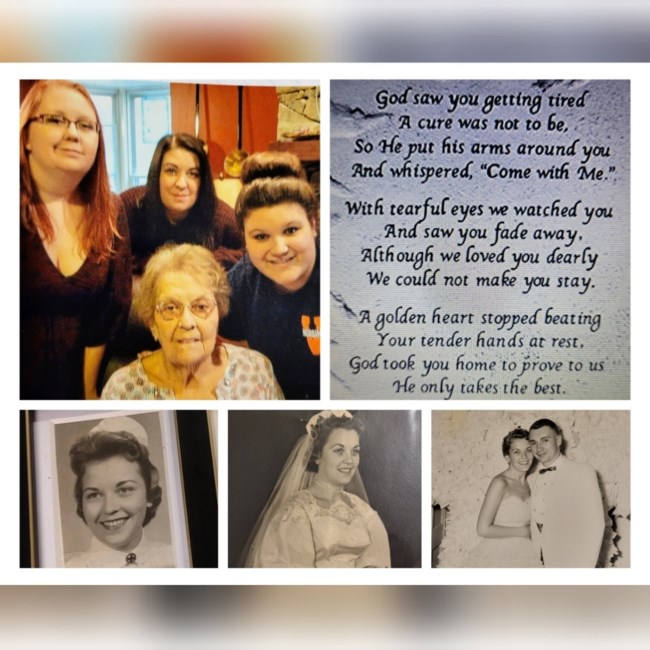 GREENVILLE, NC - On the morning of Thursday, September 15th just before noon, another angel from this earth ascended to heaven to reunite with family members and join God's flock. Alma Irene Cook Candler, age 85, gracefully passed after a long noble battle with the complications and challenges of dementia. Alma affectionally known as Irene was preceded in death by her parents Floyd and Helen Cook, husband Dr. Edrick L. Candler Jr., mother and father in-laws Edrick Sr. and Virginia Candler, brothers John and wife Barbara, Robert, and Duane Cook. She was survived by her brother, Reverend Boyd Cook, and wife Margaret, and widow of Robert Cook, Sarah. A devoted mother Irene, is survived by a son Christopher E. Candler and wife Debra Candler, daughters Kimberley I. Kirkland and husband Stan, Elizabeth C. Eberhardt, and husband Douglas. As well as three granddaughters, Kristyn Kirkland Epperson and husband Jacob, Stacy Candler Kirkland, and Sarah Elizabeth Alter. Irene was a wonderful person who loved all and knew no enemies. Her golden heart and sweet demeanor would win you over seconds after meeting her for the first time. Blessed with the gift of gab, Irene was never at a loss of words and had an amazing sense of humor. Irene, born in South Carolina and raised in Columbia, graduated from Irmo High School and graduated in 1958 from the Columbia School of Nursing. While working in the hospital, she crossed paths with a young lab technician, Edrick L. Candler Jr., who would marry Irene. They spent 34 wonderful years together before Ed passed in July of 1994. Irene worked as a registered nurse at several hospitals and doctor offices in 6 different states. Columbia Hospital in Columbia, South Carolina, Harriman Hospital and Oak Ridge Hospital in Tennessee, Putnam Community Hospital in Putnam, New York, Macungie Medical Group in Macungie, Pennsylvania, and Dr. Kenneth Burnside at the Dublin Medical Group in Dublin, Ohio. Her passion was her family and nursing but, Irene loved singing and was involved in Sweet Adelines Chorus and The Up and Atoms Quartet in Oak Ridge, Tennessee. Raised at Saint Andrews Lutheran Church in Columbia, South Carolina, Irene married into the Episcopal faith and became a member at Saint Stephen's Episcopal Church while in Oak Ridge, Tennessee. Most recently, Irene especially enjoyed her years as a member of Saint Timothy's Episcopal Church while living in Greenville, North Carolina. Interment services for Irene will be graveside on Saturday, October 8th, 2022 at 11:00 a.m. at Saint Andrew's Lutheran Church Cemetery, 421 Saint Andrews Road, Columbia, South Carolina. St Andrew's Lutheran Church and Dunbar Funeral Home, Dutch Fork Chapel, Irmo SC will be handling arrangement for her service in Columbia . On Sunday, October 16th, 2022 at 2:00 p.m., there will be a ceremony for Celebration of Life in the chapel at Saint Timothy's Episcopal Church, 107 Louis Street in Greenville, North Carolina. In lieu of flowers, please send any donations to St. Timothy's Episcopal Church 107 Louis St. Greenville, North Carolina 27858.
See more See Less

In Memory Of Alma Irene Candler