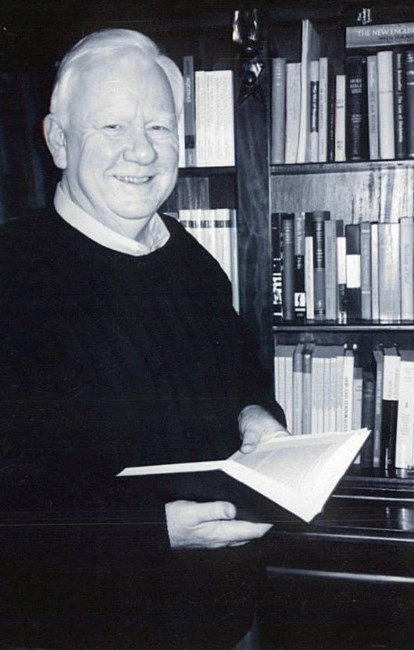 Eugene (Gene) Thomas Long, III, loving husband, father and grandfather, Distinguished Professor of Philosophy Emeritus of the University of South Carolina, died at home on Friday March 13, 2020 following a three year struggle with Pulmonary Fibrosis. Gene was born in 1935 in Richmond Virginia, the first child of Eugene Thomas Long Jr. and Emily Barker Long. Gene and his parents lived in Washington DC for three years before returning to Richmond where he lived until he graduated from college. Gene is survived by his wife, Carolyn Macleod Long, Ph.D., son, Scott Alexander Long of Roswell, Georgia (his wife, Emilie Hermel, and their children Thomas (his fiancée, Natalie Tilly), Nicolas and Anäis) and daughter, Kathryn Long Mahoney of Columbia, South Carolina (her husband, Robert Mahoney and their children, Caroline and Elizabeth). Gene is also survived by his brother Burke Long of Brunswick, Maine and sister Nancy Roberts of San Antonio, Texas. It was not unusual to see the family gathered around the dining room table at the homes of Scott and Kathy or at Lyn and Gene’s home on Lake Murray in Chapin, South Carolina and their summer home in Cashiers in the mountains of North Carolina, where from time to time you might catch Gene working with his chain saw or cooking a Chinese or Thai dinner. Gene was a member of the award winning John Marshall High School Cadet Band, playing baritone horn and trombone and serving as Lieutenant Drum Major. He also played trombone in the popular Tommy Hall Dance Band. A reluctant college student, he commuted to Randolph-Macon College where he studied Economics and Philosophy while working part time as a florist, and playing dance music on the weekends. Upon graduation he enrolled in the Bachelor of Divinity degree program at Duke University where he met Carolyn (Lyn) Twiname Macleod of Carmel, New York. Lyn, whom he always called his girlfriend, was at Duke studying for the M.A.T. in Mathematics and Education. Shortly after their wedding in 1960 they moved to Glasgow, Scotland where Gene was a postgraduate student in philosophical theology at the University of Glasgow and Lyn was a primary school teacher. Gene often said Lyn and he grew up together in Scotland and over the years made numerous trips “back home.” While in Scotland Gene and Lyn also spent a summer in Marburg, Germany where Gene was a research student at Marburg University. Following graduation from Glasgow in 1964, Gene was invited to join the faculty in philosophy at his alma mater. Lyn and Gene quickly settled in and soon Scott and Kathy were born. During that time the family spent a year in Chapel Hill, North Carolina where Gene was a Research Fellow in the Duke-UNC Cooperative Program in the Humanities. He joined the philosophy faculty at the University of South Carolina in 1970 and subsequently served as Department Chair for fifteen years before returning to full time teaching and research. His first book, Jaspers and Bultmann: A Dialogue Between Philosophy in the Existentialist Tradition was published while at Randolph Macon, but many books and articles in European philosophy and the philosophy of religion followed, including, Existence, Being and God and Twentieth Century Philosophy of Religion 1900-2000. He served as President of the Society for Philosophy of Religion, The Metaphysical Society of America and Secretary/Treasurer of the Eastern Division of the American Philosophical Society. In addition he was for twenty years Editor-in-Chief of the International Journal for Philosophy of Religion. Gene often expressed deep gratitude to his European and American colleagues who, on the occasion of his retirement, presented him with a collection of essays entitled, Philosophy of Religion for a New Century, Essays in Honor of Eugene Thomas Long and to the Associates for Philosophy of Religion, for establishing the Eugene Thomas and Carolyn Macleod Long Scholarship in the Philosophy at Randolph Macon College. A few years after retirement Gene returned to some of his earlier musical interests. He played euphonium with the Columbia Community Concert Band, and trombone with the Gene Dykes Jazz Orchestra, the Blythewood Jazz Orchestra and the Carl Payne Big Band. He also sang with the Lexington County Choral Society and the Dutch Fork Choral Society and collected what he called his ordinary guy’s art collection, including works from Piranesi, to the impressionists, post impressionists, the modernists and the cobras. In their Glasgow days Lyn and Gene crossed the Atlantic on ship several times carrying their household belongings. In later years, however, they felt themselves fortunate to be able to travel widely in Europe and Asia, “mucking about” on their own, as Gene often said, meeting and making friends in local pubs, theatres, jazz clubs and restaurants. A member of Saint Francis of Assisi Episcopal Church in Chapin, Gene served on the vestry, organized workshops on themes of world religions and social justice, prepared Chinese banquets for church auctions and provided instrumental and vocal solos for worship services and concerts. A Celebration of his life will be held at 11:00 a.m. on his Birthday, Monday March 16th, at Saint Francis of Assisi Episcopal Church, and in accordance with his wishes, there will be music, perhaps including a bit of jazz. Memorials may be made in his name to South Carolina Association of Habitat for Humanity Affiliates, PO Box 1990, Mount Pleasant, SC 29465. Interment will be later this summer at the Church of the Good Shepherd in Cashiers, North Carolina where the family spent summers for more than 40 years. Please share memories at www.dunbarfunerals.com
See more See Less