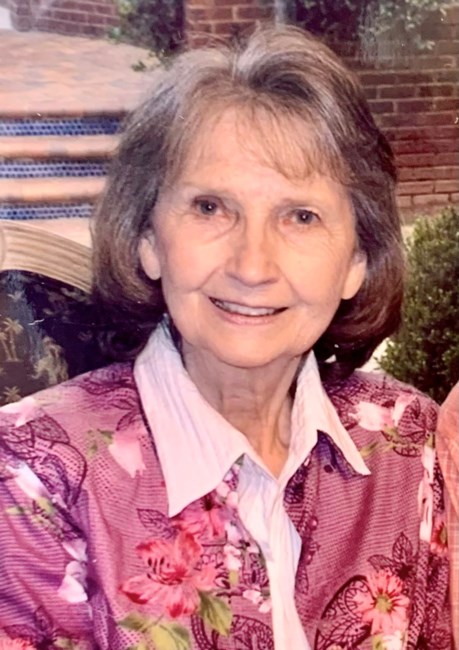 Mae Guerry, 89, passed away peacefully Saturday, January 14, 2023. She is once again reunited with her beloved husband of 65 years, Henderson “HG” Guerry, Jr., who recently passed away. Mae was born in Cope, South Carolina to the late George Anderson Hutto, Sr. and Sara Shuler Hutto. She graduated from Fort Mill High School in 1950 and went on to Winthrop College, earning her bachelor’s degree in Business Education in 1954. Mae and Henderson met for the first time at the Pavilion in Myrtle Beach in front of the player piano. Shortly after they began their courtship, Henderson was sent overseas to France for his military assignment. During his absence, Mae was chosen to work in Washington D.C. as a secretary for Senator Strom Thurmond. Henderson returned to South Carolina after two years and they resumed their courtship; Mae left Washington D.C. and they were married on September 21, 1957 in Myrtle Beach where they remained to start a family. Mae began a long career in education; she and her family settled in Irmo, South Carolina in 1971. In 1973 Mae earned her Masters of Art in Teaching from the University of South Carolina and continued as an elementary school teacher until 1994, exceptionally fond of her time as a teacher of 2nd grade at Sandel Elementary. Mae was so loved by her students and many frequently asked to go home with her. In her retirement years, she enjoyed living on Lake Murray and spending time with her family and friends. Many of her Friday nights were spent playing cards with her special bridge group friends. Mae and Henderson, avid Gamecock fans, loved going to many Carolina football games. Mae also enjoyed going to the Town Theatre and out to dinner with close friends. She and Henderson were active in their Sunday school class and enjoyed the friendships there. Mae continued to keep in touch with her dear high school and college friends. In her senior Winthrop yearbook, Mae was described as “soft-spoken” and “a perfect lady”. Mae was an absolute blessing to all; a loving, devoted and selfless mother, wife, daughter, friend and grandmother. Mae will be dearly missed by her children Michael Henderson Guerry, Sarena Guerry Graczyk (Doug), Cynthia Guerry Ames (Ken) and four grandchildren, Brandon and Brooke Graczyk and Morgan and Matthew Ames. Mae was predeceased by her husband, Henderson Guerry, Jr., her father, George A. Hutto , Sr., her mother, Sara S. Hutto, her brother, George A. Hutto, Jr. and her father-in-law and mother-in-law Henderson Guerry, Sr. and Maude M. Guerry. A memorial service is scheduled for Thursday, January 19, 2023. The service will start at 3:00 pm at Union United Methodist Church. The family will receive friends following the service in the church Fellowship Hall. A private burial ceremony will be held the following day at Ocean Woods Memorial Cemetery, Myrtle Beach. Memorials may be given to the charity of one’s choice or to Union United Methodist Church, 7582 Woodrow Street, Irmo SC 29063.
See more See Less

In Memory Of Mae Hutto Guerry