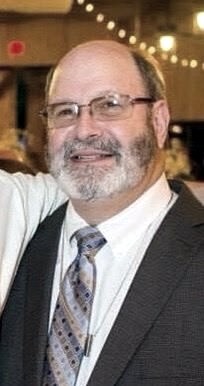 On Thursday, May 28, 2020, Gary Roberts, loving husband and father, passed away peacefully at the age of 64 after a brief illness. He was surrounded by his wife and daughter, and now is reunited with his son, Clay, in Heaven. A native of Jacksonville, Gary was raised on the Westside and graduated from Ed White High School in 1974. While at Jeb Stuart Junior High, he found a passion for music and regularly played trombone in many church and jazz bands until his death. Gary graduated from Mercer University of Atlanta (1981) with an advanced degree in Pharmacy (PharmD) and a residency in IV nutrition (TPN), one of the first pharmacists in the nation to specialize in this therapy. Upon returning to Jacksonville, Gary was the Clinical Pharmacist at Riverside Hospital where he developed protocols for successfully maintaining a TPN patient outside of the hospital setting, unheard of at the time. This spawned a business in IV therapies, which was later purchased by a major prescription benefit manager. After the purchase, Gary longed to return to his retail pharmacy roots, and despite a tough economy, he opened Roberts Southbank Pharmacy in San Marco in 2009, which thrives to this day. Upon the death of his son Clay in 2007, Gary envisioned and created the nonprofit In River Or Ocean (IROO) to instill in the community the greatness of being on the water with friends and family, whether fishing or boating. The Roberts established a college scholarship in Clay’s name at Bishop Kenny, awarded annually, for the senior student who most exhibits the qualities and character of Clay. Gary was preceded in death by his son, Clay, his father, Tillman Roberts and his mother, Mildred Rogero. He is survived by his loving wife of 34 years, Terry, and his daughter Casey. A memorial service celebrating Gary’s life and reunion with his son in Heaven will be announced at a future date. In lieu of gifts or flowers, the family asks that donations be made to In River Or Ocean, 1625 Atlantic Blvd, Jacksonville, FL 32207 or www.inriverorocean.org. Hardage-Giddens Riverside Memorial Park and Funeral Home, 7242 Normandy Blvd., Jacksonville, FL 32205 is serving the family. Please leave words of comfort and condolences for the family on our online guest register at www.hgriversidefuneralhome.com
See more See Less

In Memory Of Gary Anthony Roberts