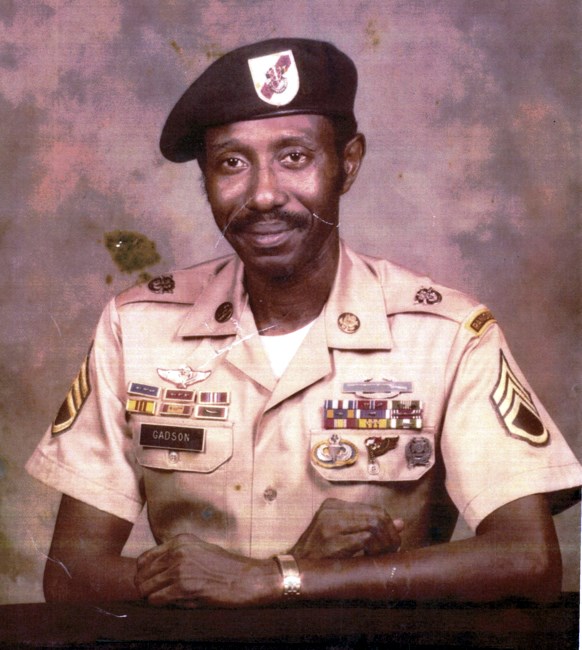 Gilbert William Gadson, Sr. was born on March 15, 1940, to Willie Gadson and Sadie Martin in Jacksonville, Florida. He was a member of Simpson Memorial United Methodist Church and served as Chairman of the Men’s Department. Gilbert attended James Weldon Johnson and New Stanton Senior High School, graduating from the class of 1957; as he would say “I was pretty smart, I wasn’t no dummy!” He attended Florida Agricultural & Mechanical University, received bachelor’s degree in History, was a member of the Incomparable Marching 100, and played the trumpet. Gilbert joined F & AM Masons, where he served as Senior Deacon, and Alpha Phi Omega Fraternity, where he served as Dean of Pledgees. In 1964, Gilbert Enlisted in the United States Army, where he was Staff Sergeant in the 7th Special Forces Group “Green Beret” Airborne; Assistant Operations, Intelligence Sergeant, Drug Counselor, and Senior Medical Specialist in the 20th Special Forces Group Airborne. Gilbert served two combat tours in the Republic of South Vietnam as Combat Infantry Squad Leader and Platoon Sergeant with 173rd Airborne Brigade and as Long Range Combat Reconnaissance team leader and Operations Sergeant for Special Forces “A” Team with the 5th Special Forces Group Airborne, where he planned and coordinated team combat missions. He was also a Master Parachuter, meaning he “Jumped out of a PERFECTLY good airplane for no reason.” Gilbert received many decorations, including the Bronze Star with Valor (V) and Oak Leaf Cluster, Purple Heart with Oak Leaf Cluster, and somehow managed to earn the Good Conduct Medal. Still, his highest decoration of all was the Silver Star. In 1981, Gilbert received an Honorable Discharge. In 1982, he married the love of his life LaVera M. Carter (White Oak, Georgia). Gilbert devoted his life to Christ and assisted in the founding of The Synagogue Church where he served as Deacon and later as Minister, under the guidance of Pastor Aretha Hill. He was always willing to help and never had a negative word to speak about you unless it was your truth. In his leisure Gilbert enjoyed spending time with his family, telling stories about his mischievous childhood antics, his time on “The Hill” and the ‘Nam, speed reading, crossword puzzles, watching Bugs Bunny, Tom & Jerry, or a good football game while sipping an O’Doul’s. He was a man that never met a stranger; even if he didn’t know you, he knew a member of your family. He’s survived by his wife LaVera Gadson and his children Gilbert W. Gadson Jr. (Queen), Randy R. Towles (Connie), Reggie R. Towles, Gerrolynn W. Gadson (Donny), and Tina May, all of Jacksonville, Florida; Godfrey Harrington, Madra Gadson of Seattle, Washington, and Keon L. Gadson (Greensboro, North Carolina) Grandchildren: Tiffanie S. Towles, Tirah S. Towles, Tylah S. Towles, Patrick L. Cooper Jr., Jalen C. Cooper, Donny E. Graham Jr., Diamond Gadson, Genesis Gomez, Javante, Khealeona, Brianna, Tinanna Great-Grandchildren: Mi’Kya, Keanu, Amier, Amari, Amiah; Lifelong friend and partner in crime Fredrick “Freddie” Richardson Jr., and a host of family, classmates and army buddies that checked in on him from time to time. Gilbert had the opportunity to see and experience things that many people haven’t here on Earth but, now it’s his time to walk around Heaven...this isn’t Goodbye, but See Ya Later… A visitation for Gilbert will be held Sunday, September 25, 2022 from 1:00 PM to 3:00 PM at Hardage-Giddens, Riverside Memorial Park & Funeral Home, 7242 Normandy Blvd, Jacksonville, FL 32205. A funeral service will occur Monday, September 26, 2022 from 11:00 AM to 12:30 PM at Floradale Faith Chapel Holiness Church, 2808 Buckman St, Jacksonville, FL 32206. A committal service will occur Monday, September 26, 2022 from 1:30 PM to 2:00 PM at Jacksonville National Cemetery, 4083 Lannie Rd, Jacksonville, FL 32218. Fond memories and expressions of sympathy may be shared at www.hgriversidefuneralhome.com for the Gadson family.
See more See Less