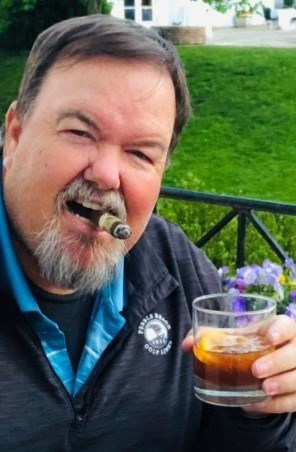 Kevin Wylie Hutto passed away in Saint Augustine, Florida on August 2, 2021, at the age of 50. Kevin was born in Camden, South Carolina on June 27, 1971. He graduated from Camden High School and went on to Georgia Tech University, where he was a member of the Yellow Jackets Golf Team. He was a creative entrepreneur and had many successful businesses. Kevin's whole life is just one big funny antidote filled with laughs, crude jokes and 2-hour conversations with him talking your ear off. What he talked about most was Dawn and his three kids. Dawn was his queen (as listed in his phone). She is his anchor to his crazy life. She is the one he ran all of his ideas by, his sounding board. Anisley, his oldest, gave him no choice but to love pets. Rue, the cat that he was allergic to, is proof of that. Camryn and Kevin shared a special bond through the love of music, from Billie Eilish to Nirvana. They wrote songs and taught themselves how to play guitar. Wylie is his namesake, his boy. They enjoyed golfing, fishing, and gaming together, and against Dawn’s better judgement, a little Pickle Rick. Kevin was larger than life in all he set his mind to. He had a lot of principles that he lived by, but the most important thing he lived by was to always have a mind that kept on learning and growing. He had several hobbies. They included golf, reading, inventing, motorcycles, and music. Kevin developed and maintained golf buddies across the United States. He had a special way of collecting friends wherever he went. He could pick up a round of golf in any city that he was doing business in. A tradition that was held near to Kevin’s heart was that after a day of golfing, he would join his buddies at the house for a cigar and an old fashion. Cigars are a trademark when you think of Kevin. He was a connoisseur sharing them with his friends to enjoy. Speaking of trademarks, Kevin’s mind was a thing to witness. He created companies that are still successful today. The stories the guys could tell about the early days of the Gutter Kings or Lawn Rangers would keep you in stitches. If you need something to improve your golf swing, Hustlers Secret, created by Kevin, is still available to you via the internet. The essence of Kevin is found on YouTube, ebooks and more. Many Companies looked to Kevin for their online marketing success. And their businesses are now achieving results beyond their expectations because of his influence. Kevin was a unique motorcycle enthusiast who rode his bike like he lived his life...in big style and high fashion. He loved books and his favorite one was always the one he was currently reading. Kevin had an impact on so many that he will be forever loved and remembered. Kevin is survived by his loving wife, Dawn Hutto, of 24 years. They were married in Atlanta, Georgia on June 14, 1997. His children Ainsley Hutto (23), Camryn Hutto (18), Wylie Hutto (14). Kevin is lovingly remembered by his parents: Fred and Willie Mae Hutto of Camden, SC, his sisters Kelly Hutto Torres (Jared), Debbie Branham(Mike), Kim Welch(Chuck), Jennifer Norwood, and Angie Jones. He also leaves behind his nieces and nephews; Ben & Caroline, Larissa, Adrian, & Jenna, Aislinn, Xavier, Amaya, Isabella, & Gabriel, Haleigh & Hannah, Kelly & Christopher, and Lindsey, Caitlin, & Cody. He also leaves behind Aunts and Uncles, Barbara Brague (Rick), Vivian Dowey (Steve), Janice Rodgers (Mike), & Curtis Hutto (Rudene). Along with a host of cousins & friends. He is preceded in death by his Granny Jenny Pebbles, Grandma Ruby, and sister Jill Hutto. The visitation and reception will be held at the Hardage-Giddens Oaklawn Chapel, Legacy Lodge, 4801 San Jose Blvd, Jacksonville, FL 32207, on Sunday, August 8, 2021, from 2:00 PM to 5:00 PM. A funeral service will be held Monday, August 9, 2021, from 11:00 AM at Hardage-Giddens Oaklawn Chapel, Legacy Lodge with interment to follow. In lieu of flowers, memorial donations may be made on GoFundMe by clicking on the link provided here. Fundraiser by Tish Carman : Kevin Wylie Hutto- Legacy fund (gofundme.com). Condolences for the family may be offered online at https://www.dignitymemorial.com/obituaries/jacksonville-fl/kevin-hutto-10295571
See more See Less

In Memory Of Kevin Wylie Hutto