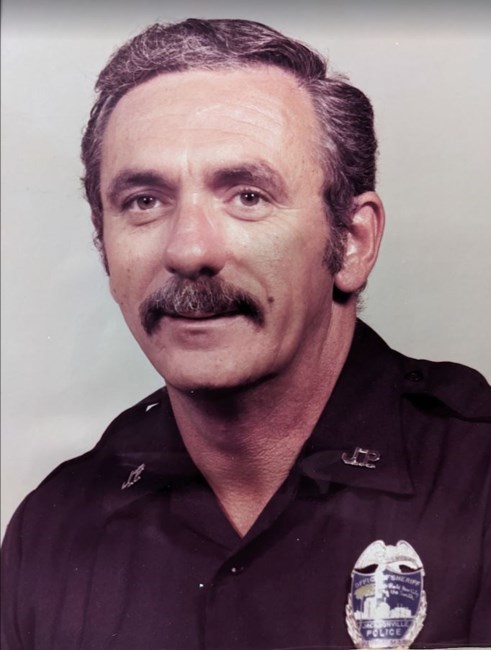 Steven Eugene Foster, 82 years old, died January 19th at home with family in Jacksonville, FL. Steven graduated from Rule High School in Knoxville Tennessee. He went on to be a part of the National Guard and then the U.S. Navy. When he was honorably discharged from the U.S. Navy he joined the police force where he worked as an Evidence Technician police officer with the Jacksonville Sheriff's Office. He retired for only 2 days in 1997, after 24 years of service, before taking a position as a bailiff at the Duval County Courthouse where he eventually became Administrative Sergeant of Court Security until he officially retired 16 years later. He was an active member in the Girl Scouts of America (Troop 607) and Boys Scouts of America and enjoyed volunteering at campouts and events. He loved camping with his children and grandchildren. He has been awarded numerous recognitions for his volunteer efforts and was loved by his community. He was a seasoned self taught carpenter and made most of the furniture in his home in his spare time. Steven had a big personality and an even bigger heart. He loved his family and was someone you could depend on in a time of need. Whether it was helping with a project or just a listening ear. He will be greatly missed by friends and family. He was predeceased by his Mother and Father. Son Sidney South and daughter Joyce Monday (husband Alan Monday). He is survived by his brother, Phil Foster (wife Cathy), nephew Dustin, niece Davi. His wife, Elvie Foster, son Timothy Foster (wife Jeanie) , two daughters Kimberly Chancey (husband Jason) and Amanda Foster, 8 grandchildren Troy, Donna (husband Michael), Steven, Haydn, Braydn, Riley, Noah and Siddalee, and 4 great great grandchildren, Jeremiah, Mateo, Roman and Rhea. Our family would like to thank the staff at Baptist Hospital, M.D. Anderson Cancer Center and Community Hospice for all their love and care. Steven's memorial service will be held at a later time after his cremation to allow the family time to grieve and plan. Information about this service can be obtained by contacting Amanda or Elvie Foster at 904-707-3745. A GoFund me has been set up in lieu of flowers to help Elvie with expenses. If you would like to donate please visit https://gofund.me/df54df87 Fond memories and expressions of sympathy may be shared at www.hgriversidefuneralhome.com for the Foster family.
See more See Less

In Memory Of Steven Eugene Foster