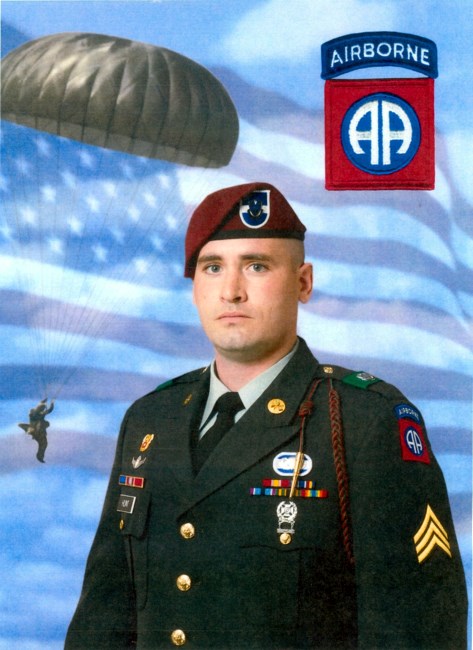 On Wednesday, May 1st, 2019, Sergeant Benjamin Casey Hunt, loving husband and father, passed away at the age of 35. Benjamin was born on September 27, 1983 in Twin Falls, ID to Lori Smith and Kenneth Hunt. He Joined the Army on January 3rd, 2008. His eleven year military career was marked with achievement and overseas activity. SGT Hunt deployed to Haiti in 2010 under Operation Unified Response and Iraq in 2011 under Operation New Dawn. Benjamin’s greatest accomplishment is his son Benjamin Marcus Hunt. On March 19th, 2011 he married Crystal Mae Grabowski. Benjamin had a love for new experiences. Between the Army and traveling with his family he was able to parachute into the deserts of Egypt and visit the pyramids. He was able to assist the locals of Haiti after the 2010 earthquakes. As a husband and father he traveled with his family across the United States and cruised to the Bahamas and Mexico. Benjamin had a passion for vehicles and loved his Jeep. Ben was an avid listener of music; he enjoyed a variety ranging from Johnny Cash to Sublime. He was known for him infectious smile, had an amazing ability to make people laugh. Benjamin possessed a great sense of humor and quick wit. Ben loved his large dogs - his great dane and mastiff. He had a huge heart and always did his best to help anyone in need. Always putting others needs before his own. Benjamin was preceded in death by this adored Grandfather Darrel Smith. He is survived by his wife Crystal and their unborn child. His son Benjamin, Grandmother Arlene Smith, adopted mother Renee Portrey, biological parents Lori and Kenneth, many siblings, several cousins, nieces, and nephews. A memorial service for Sergeant Benjamin Casey Hunt will be 10AM Friday May 17, 2019 at Crawford-Bowers Funeral Home in Killeen, Texas.
See more See Less