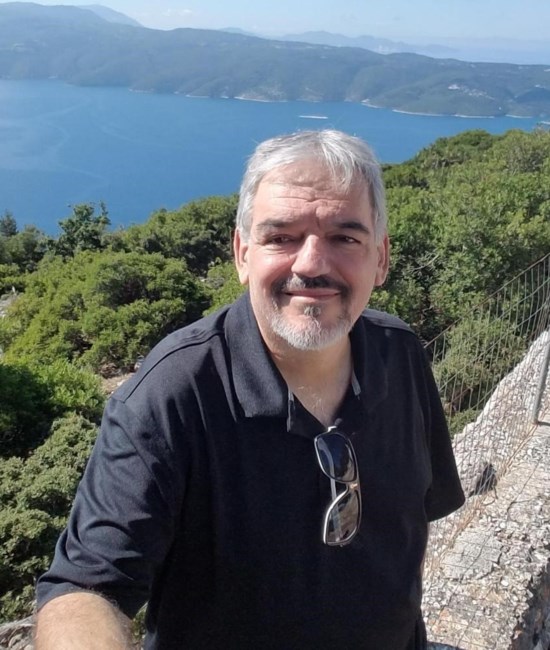 Panos Manias, beloved husband and father, passed away on the morning of May 1, 2020. He is survived by his wife, Angelika; two children, Pandios and Kyriakos; and his brother, Minas. He is preceded in death by his parents, Pantios and Evdokia. Panos was born in Greece on June 5th, 1955. He lived in Peraxori, Ithaki until the age of 15 when he moved to New York. He graduated from John F. Kennedy High School, and then worked as a Pastry Chef where he mastered the art of making the New York Cheesecake. He began his college career at The City College of New York before transferring and graduating from Manhattan College, where he received a degree in Mechanical Engineering. While visiting his family in Greece, Panos met Angelika. The two families lived right down the street from one another. Panos could not keep his eyes off Angelika, and when he left Greece, they kept in touch, writing letters back and forth. Eventually the two got married and had their children in New York. Shortly after the birth of his two sons, Panos took his family to Houston, Texas to start a career as a Mail Handler at USPS-- a career he felt would provide the most stability and benefits for his family and their futures. Every decision Panos made was to the benefit of his family. The next few decades could only be described as suburban bliss: filled with backyard BBQs, elaborate birthday celebrations, Greek Easter with the whole family, and Little League Football games. Panos loved to spend time with his family and friends, golf, make the best New York Cheesecake you’ve ever had, watch football (his team was the Jets), play catch with his sons, watch movies, and observe the squirrels at his bird feeders, laughing as they struggled through his obstacles. Panos exhibited all the qualities of a great husband and father. He was patient, loving, kind, and devoted to his family. He attended all of his son’s football games, band events, and Corps events when they were in school. He was so proud of both his sons for their acceptance into Texas A & M University and for the men that they have each become. Panos was also a man of discipline and conviction; he had routines that he stuck by and he was meticulous and organized. A patriarch of his family, he left quite an impression on those who knew him. His death was unexpected, with only two months left until his retirement. As always with the sudden death of someone so young, all of those who knew him thought that they had more time left. He will forever be loved and missed by his family and friends. May he live in eternal glory and peace in the hearts and minds of everyone he left behind.
See more See Less

In Memory Of Panos Manias