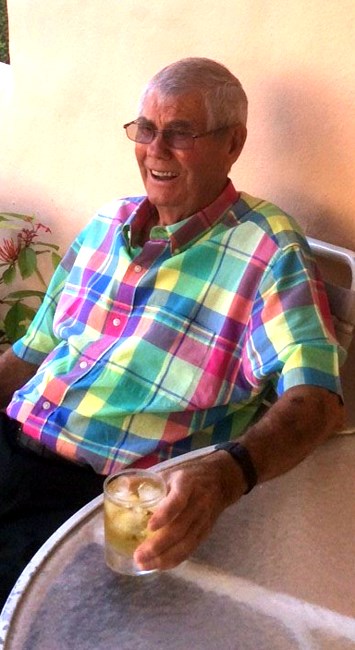 Howard Austin Gerald, age 91, of Little River, SC was a cherished father, grandfather, son, brother, and significant other who passed away Monday, January 16, 2023 at McLeod Seacoast Hospital in Little River, SC. Born on May 3, 1931 in Loris, SC he was the son of the late William McKinley "Mack" Gerald and Carrie Bell Nealy Gerald. Howard graduated from Loris High School and served in the US Navy, being stationed at Pearl Harbor during the Korean War. Upon his honorable discharge, he set up residence in Oahu, Hawaii and played country and western music for 23 years as Howard Gerald and the Geraldaires. He then returned to Loris where he farmed, followed by working as a golf course mechanic at Carolina Shores and assistant superintendent at Heather Glen Golf Course. Howard started the band Classic Country and loved playing locally in the Myrtle Beach area and at VFW Post 10804 until retiring in 2014. He is survived by his sister, Kathleen Gonzales; daughters, Pamela Lignelli, Melody (Dave) Kreiling, Candace Algar (Jeff); son, Douglas (Alisa) Gerald; 6 grandchildren; 12 great-grandchildren, and his significant other Jill Cloutier. Howard was preceded in death by his parents along with his son, Jeffrey Gerald. A visitation will be held from 4:00 PM - 6:00 PM Thursday, January 26, 2023 at Lee Funeral Home and Crematory in Little River, SC followed by a celebration of life at VFW Post 10804. In lieu of flowers, memorial donations in honor of Howard Gerald may be made to the Veterans for Foreign Wars (VFW) Post 10804 at 111 State Hwy 57N, Little River, SC 29566, or the Cure Alzheimer Fund https://curealz.org/giving/donate/ . Fond memories and expressions of sympathy may be shared at www.leefhandcrematory.com for the Gerald family. Lee Funeral Home and Crematory of Little River/North Myrtle Beach is serving the family.
See more See Less

In Memory Of Howard Austin Gerald