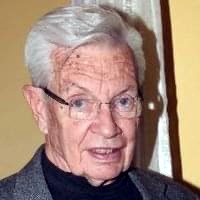 Robert Peter Becker, February 11, 1931 to January 18, 2022 Robert Becker passed away January 18, 2022 in Livingston, NJ. At the time of his death, he was weeks away from his 91st birthday. Robert was known as Bob, Bobby, Dad, Uncle Bob, Grandpa, Great Grandpop and Daddy Bob, all names he treasured. Left behind to mourn his passing are his children, Debra (Philip) Bruno, Mark (Calogera) Becker, Dawn (Gene) Tedeschi, Dianne (Dave) Kaeli, Donna (Ken) Taylor, and Gindy (Mike) Sullivan. He also leaves behind his most treasured gifts, his grandchildren, Carrie (Jeff) Francis, Philip (Amy) Bruno, Richard (Jodi) Bruno, Robert (Elena) Bruno, Erica Aumais, Kindra (Josh Redd), Nichole (Josh) Reed, Andrew Becker, Caitlyn (Dalyn) Darone, Melissa (Zak Judd) Kaeli, Michele Tedeschi, Jessica Taylor, Emma Kaeli, Samantha Sullivan, Jack Sullivan, and Daniel Sullivan. He took great joy in bragging about them, often joking that brilliance skips a generation. But the group that brought the biggest smiles for him where his 10 great grandkids, Nick, Kayla, Christina, Matt, Reese, Ethan, Juliana, Macie, Philip, and Hudson. Bob greatly enjoyed the company of his sweet nieces Janet, Irene, and Marian. Bob is predeceased by his true soul mate, Virginia, his parents George and Marie Becker, his siblings George, Dorothy, Jean, and Marian, and his grandson, Gabriel. Bob grew up in the Bronx and summered with his large, fun-loving and boisterous family in Calicoon Center, NY. Bob graduated from Regis High School and Fordham University, with a BS in Physics. After graduation, Bob served in the United States Air Force. Soon after joining the Air Force, Bob married the love of his life, Ginny, and they were married for 62 years before her passing in 2016. The newlyweds were stationed at Brooks Air Force Base where they started their family. After Bob’s honorable discharge, the family moved back to the Bronx and he began his working career at RCA in Harrison, NJ. Bob and growing family moved to Livingston, NJ in 1964 where the house they bought was built into a warm and loving home. Bob lived in this home until his death. Bob worked for several companies retiring from L3 Harris in 2009. He would often joke that he worked for three companies and never left his seat. Bob was an avid reader, finishing 3 to 4 books per week. His kindle was always at his side. He traveled far and wide with his wife. His favorite places were Paris, Hawaii, and Hilton Head. His last adventure was a cruise up the Danube River he took with Ginny for their 60th wedding anniversary. Bob was a quick witted, genuinely kind man who was passionate about his faith and was a parishioner at St. Philomena’s Church for 58 years. His other great passion was his family who all adored him as much as he adored them. Gifts in Bob’s memory may be made to The Livingston Fist Aid Squad (62 S. Livingston Ave, Livingston, NJ 07039), Family Promise of Sussex County (19 Church Street Newton, NJ 07860), or St. Jude’s Research Hospital.
See more See Less

In Memory Of Robert P. Becker