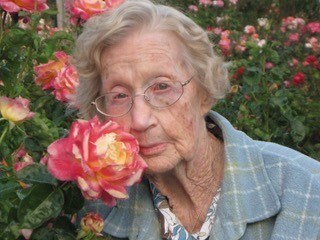 Alice Bauer was born on March 6, 1918 in Spicer, North Park, Colorado to Edna Kinkel and Alfred Scott Graham. Except that she wasn’t - she was actually born on April 6, 1918. The doctor, who had arrived drunk and about a week late, had recorded the wrong month! Alice would regale her family with this story any time the circumstances of her birth were discussed. When she was around 8 years old, Alice moved to Steamboat Springs with her Mother, Father, Brother, and Sister by way of a covered wagon over Buffalo Pass. Of this journey, she would later recount that she lost her cat when the wagon tipped over and the cage popped open. They also lost the dandelion beer that her mom had made; it exploded after being shaken during the wagon mishap. Alice graduated from Steamboat Springs High School in 1936. Following high school, she worked for the county nurse, and then later, an insurance company that eventually became Furlong Hardware store. She would tell her family that, during this time, she once drove to Los Angeles with friends to dance with the troops at the Palladium – she was the one to drive through the city because she was the bravest of the group. She married Grant Bauer on July 17, 1949 and they welcomed a daughter, Janice, in 1950 and son, Robert, in 1953. The family lived on the Boulevard until 1962 when they moved back to the family ranch (current day Steamboat II). They moved back to town in 1968 and lived on Oak Street until 1975 when they built their home on Montview by Mt. Werner. In 1969, Alice started working as an accountant for the Yampa Valley Electric Company, from which she retired at the age of 70 in 1988. Then, 10 years later, in 1998 she and Grant moved to Loveland, CO. After her retirement, she volunteered first at the hospital in Steamboat, and then at a hospital in Loveland, until 2008. Alice loved to give and receive flowers and cards, and she was always up for a game of cards at the kitchen table. A fond memory is that whenever Alice responded to a question with “Yeah”, she would quickly correct it saying “I mean yes”. She will be sorely missed. Alice is survived by her sister-in-law Marilyn O’Connell, daughter Jan Bump (Allan), son Bob Bauer (AeChin), three grandchildren Laura McDonald (Chris), Larry McGrew (Lisa), Holle Schaper (Kevin), 5 great-grandchildren Hannah and Joelle McDonald, Graylon and Colton McGrew, Alice Schaper, and so many nieces, nephews, cousins and other loved ones. A memorial service will be held at Ahlberg Funeral Chapel, 326 Terry St., Longmont, CO on Monday November 7th at 10:30am MST, here is a link to live stream, ckpmediaservices.com/live . We encourage folks to dress in purple since that was Alice’s favorite color. Donations can be sent In Memory of Alice Bauer to McKee Medical Center Volunteer Services Department c/o Textiles (https://form-renderer-app.donorperfect.io/give/mckee-wellness-foundation/fill-a-critical-gap-in-your-community).
See more See Less

In Memory Of Alice Marie Bauer