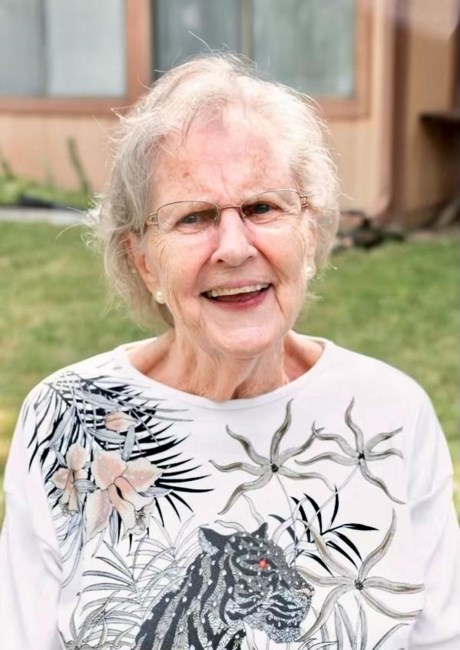 It is with heavy hearts that the family of Lucille Marie Christensen shares that she passed from this earthly life on May 3rd, 2022. She was born to James Vodicka and Anna Vondra Vodicka on July 22nd, 1929, in Omaha, Nebraska. The third of five children, Lucille and her siblings worked in their parents’ family business from a young age. Lucille attended St. Mary’s High School. As a student at St. Mary’s, and attending daily Mass, she did not know that the love of her life was in that same church, sitting with his fellow students from Creighton Prep. It wasn’t until after her graduation that she met Robert Christensen, and they married on June 14th, 1952. Lucille worked for a number of years at Union Pacific Headquarters, and she took pride in being known as “the fastest typist at Union Pacific”. Lucille’s family moved to Longmont, Colorado in 1969. She was of the Catholic faith and was a member of several Catholic churches during her lifetime. Lucille devoted her life to her husband, children, grandchildren, and great grandchildren. She was extremely proud of each and every one of them and they were the joy of her life. Among her many interests she enjoyed singing in choirs, bowling on various leagues with her husband and family, and the traveling she was able to experience. She and her husband felt blessed to enjoy the snowbird life for fourteen years, until Robert’s passing in 2006. Lucille is survived by four children: Constance Bridge, Kari Evig, David Christensen (Holly), and Robert Christensen. She leaves behind seven grandchildren: Andrew, Amanda, and Adam Bridge; Jon and Joe Evig; Shyre Mann and Devon Christensen. She is also survived by 11 great grandchildren. Lucille will be laid to rest at Foothills Gardens of Memory with a graveside service on May 17th at 2 p.m.
See more See Less

In Memory Of Lucille Marie Christensen