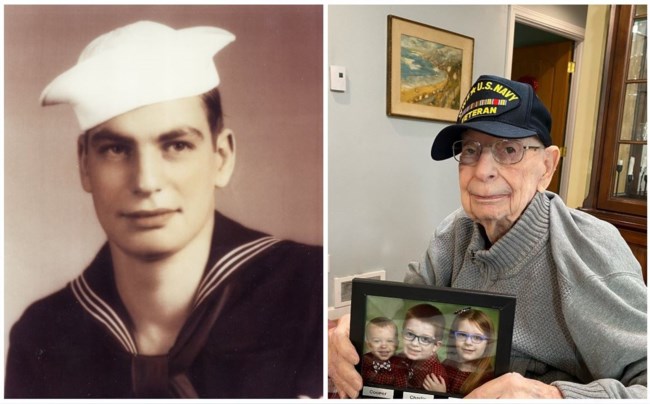 In Dad’s own words: Mr. Blackmore passed away on August 2, 2022 at age 98 years. He was born on October 14, 1923 in Saginaw, Michigan, to the late Robert and Alice Hedglin Blackmore. Armand was a veteran of World War II and held the Navy Rate of Aviation Machinist Mate Second Class. He served on the USS Nehenta Bay (CVE-74). Armand received the Asiatic-Pacific Theater campaign medal with two battle stars, as well as the American Defense, American Campaign, Sharp Shooters award and Good Conduct medals. In addition he also received from the Republic of the Philippines the Philippines Presidential Unit Citation, the Philippines Liberty medal and the Philippines Independence medal. Armand married Wilma Nuffer (nee Wyneken) at Zion Lutheran Church on June 27, 1986. He shared 28 years of love and happiness with her. Armand worked for several major airlines including Northwest Airlines at their Seattle base as an FAA Licensed Airframe and Engine Mechanic. Other employers were Lockheed Aircraft, Aviation Power Supply and North American Aviation from which Armand retired as an Aviation Technical Writer on the B1 Bomber project. Mr. Blackmore was awarded the Federal Aviation Administration Safety Award in 1965 for developing an innovative system to check the braking systems on aircraft tires. He also received two United States patents for implants that would help children born with congenital hip defects. Armand was a member of American Legion Post 150 in Frakenmuth, Michigan, Escort Carrier Sailors & Airmen Association, U.S. Navy Memorial Foundation, and the Bay City Lions Club. He is survived by two daughters from a previous marriage, Penny Lee Evans and Lou Ann Alice Isler both of Seattle, Washington; two step-daughters, Judy McPhee and Patricia Stone, and two step-sons, Warren Nuffer and Mark Nuffer. He also leaves his grandchildren, Michelle Nelson (David), and Chris Evans (Courtney), and three great-grandchildren, Charlie & Evie Nelson and Cooper Evans, with Baby Girl Evans on the way. Armand loved children and was a consistent donor to many different children’s charitable institutions. Those planning an expression of sympathy may consider memorials to Children’s Hospital of Michigan Foundation Home - The Children's Foundation (yourchildrensfoundation.org)
See more See Less

In Memory Of Armand Norton Blackmore