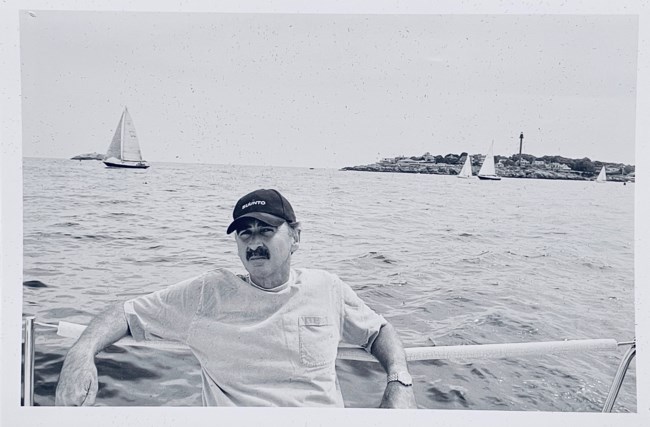 John Clayton passed away peacefully on July 31, 2022. He was 75 years old. John was born on October 8, 1946 to Mary and Jack Crouch in Everett, MA and was the oldest of three siblings. John graduated from Everett High School and immediately started working for the New England Telephone and Telegraph Company before joining the U.S. Navy and becoming a weatherman aboard various ships. He was a part of the team in 1969 that picked up the astronauts from Apollo 9 aboard the USS Guadalcanal. He went on to attend the University of California, Santa Cruz on the GI Bill and received his B.A. in philosophy. He developed a passion for road biking at that time, often taking 100 miles rides through the Santa Cruz Mountains with friends. In 1974 he met his wife, Jane, while working at Waterville Valley ski resort in New Hampshire. They eloped in Marblehead’s Abbot Hall in 1979 and just celebrated their 43rd wedding anniversary. They have two daughters, Jessica (1982) and Holly (1984) who both now live with their own families in central California. John worked in marine textiles for most of his adult life. He had a deep passion for sailing and completed multiple offshore sailboat races in New England and California. His most favorite type of sailing, however, was aboard his Bristol 35.5 named Casco alongside his wife, Jane. The two spent many summers sailing everywhere from Maine to Cape Cod. John’s children are most thankful for his instilling in them a strong sense of wonder for the world around us. John loved astronomy, photography and music. He was curious, smart and well-read. He was also very funny and maintained a very strong group of friends throughout his entire life. John is predeceased by his parents, Mary and Jack Crouch. He is survived by his wife, Jane, daughters, Jessica and Holly, four incredible grandchildren, Flynn, Dylan, Bodie and Marlowe, sister Jill DiFilippo, brother William Crouch and beloved puggles Vito and Wilma. A celebration of life will be held at the Boston Yacht Club in Marblehead, MA on Wednesday August 17, 2022 from 4-6pm. All are welcome to attend. In lieu of flowers, donations can be made to The Alzheimer’s Association. Fond memories and expressions of sympathy may be shared at www.EustisandCornellFuneralHome.com for the Clayton family.
See more See Less

In Memory Of John Clayton