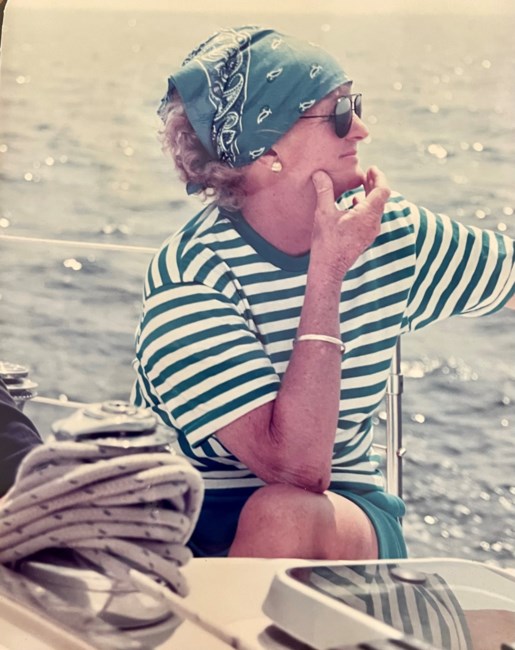 MARBLEHEAD, MA – Mary Lane Connolly Cairns, age 88, of Marblehead, MA passed away peacefully surrounded by her loving family on Sunday, January 22, 2023. She was preceded in death by her beloved husband, Walter J. Cairns, with whom she shared 53 years of marriage. A life-long resident of Marblehead, Mary Lane, affectionately referred to as Queenie by family and friends, graduated from the Windsor School and Bradford Junior College. She loved spending time with family and friends sailing, skiing, playing tennis, and especially golfing into her mid-eighties. As the daughter of Eugene T. and Eloise L. Connolly, Mary Lane enjoyed a lifetime on the water, and her passion for sailing was well known. During her younger years, she enhanced her sailing skills as an active member of the Pleon Yacht Club and then as a member of the Eastern Yacht Club for 63 years. Mary Lane and Walter were active participants in the local Shields Class for many years, moved onto Ocean Racing, and participated in numerous Eastern Cruises. With their J-40 NIXIE, they successfully competed in the Marblehead to Halifax Race finishing 2nd in class in 1991, and 1st in class and 9th overall in 1995. From there, they moved on to a custom powerboat that they cruised down east to Prince Edward Island and the south coast of Newfoundland. Raising five children, Mary Lane loved spending winter weekends and vacations with her family at their home in Franconia, NH, skiing Cannon Mountain. When the children were older and ‘out of the house’ she and Walter split their winters between skiing the slopes of Utah and residing in Palm Beach, Florida, where they enjoyed golfing and spending time with their friends at Palm Worth. In addition to Walter, Mary Lane loved to spend time with her five children, four son in-laws, one daughter in-law, fourteen grandchildren, and three great grandchildren. She is survived by her children, Susan and Jack Fischer of Marblehead, MA, Ann and Don Turner of Hollis, NH, Gail and Jack Steele of Swampscott, MA, Jim and Tamara Cairns of Minneapolis, MN, and Kate and Jamie Kellogg of Marblehead; her adoring grandchildren Sarah (Fischer) and Parker Cote, Kiley Fischer and Mark Murphy, Don Turner and Hannah Johnson, Christine (Turner) and Jason Langevin, Jennifer (Turner) and Jeremy Oak, Erin Turner, Jackson Steele, Eliza Steele, Dylan Steele, Finn Cairns, Talia Cairns, Jay Kellogg, Phoebe Kellogg and Julia Kellogg; her cherished great grand-children Maya Langevin, Nina Langevin, and Josie Turner; her sister Peggy (Connolly) Hoffman and brother Gene Connolly; and her cherished nieces, nephews, and friends. She was predeceased by siblings Barbara (Connolly) Guild and Ellen Connolly. Funeral services will be private for the family. In lieu of flowers, donations may be made in Mary Lane’s memory to the Pleon Yacht Club, 42 Foster St., Marblehead, MA 01945. Arrangements by Eustis & Cornell of Marblehead, 142 Elm Street. Fond memories and expressions of sympathy may be shared at www.eustisandcornellfuneralhome.com for the Cairns family.
See more See Less

In Memory Of Mary Lane Cairns